When Britain went into lockdown in March, it seemed like a disaster all round for investors. But winners and losers rapidly emerged from the economic rubble.

Supermarkets and technology stocks, for example, boomed as people worked and ate at home. But shares in airlines and tour operators crashed.

So are there clues for investors hunting for the next set of winners as we enter the UK’s second and – so far at least – lighter lockdown? 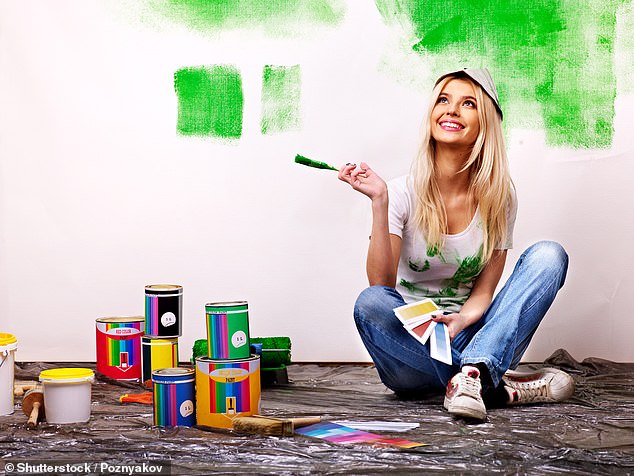 Colour of money: The DIY boom during lockdown has helped sales grow at firms like B&Q owner Kingfisher

Richard Hunter, head of markets at online stockbroker Interactive Investor, says: ‘The perils are clear and the opportunities are perhaps less obvious than you might hope under these latest restrictions.

‘It will be interesting to see whether the new ‘mini lockdown’ results in a diluted version of the success which stocks that performed strongly throughout have seen – but it’s not guaranteed.’

Jason Hollands, of broker Tilney Investments, says: ‘Many items that experienced high demand during the original lockdown, such as bicycles and laptops, are unlikely to see a repeat pattern on the basis of this latest news.’

But, he adds, restrictions on pubs and the hospitality sector might lead to a rise in home-based consumption – just like before. ‘Much of this will come via supermarkets where there are already signs of panic buying of certain items again,’ he says.

SPENDING MORE TIME IN THE GARDEN

Susannah Streeter, senior investment and markets analyst at Hargreaves Lansdown, says B&Q owner Kingfisher could be another big winner as office staff are once again asked to work from home. It enjoyed a stellar first lockdown: last week, the company said the DIY boom was so strong that it was handing back £23million of the furlough cash it took from the Government to survive.

Sales at the group – which also owns Screwfix and Castorama and Brico Depot in France – were 4 per cent higher than 2019 for the six months to July 31 as more time at home led to a spike in people improving their gardens and homes. Profits rose more than 47 per cent thanks to business rates relief and other savings.

Streeter says: ‘As well as the surge in home improvements, Kingfisher has shown it’s well positioned for the consumer shift to online with click and collect accounting for over 90 per cent of the group’s digital orders.

‘The coronavirus crisis seems to have prompted the turnaround that was eluding Kingfisher management at the start of the year, as wielding a paintbrush seems to have become a national pastime – and in most of the group’s other markets, too.

‘The challenge will be ensuring the firm can maintain higher online sales, even when the lockdown DIY trend wanes.’

BACK TO EATING AND DRINKING AT HOME

One feature of the last lockdown was a rise in drinking at home. Now, the 10pm curfew and limits on mixing with others in bars could see another spike in wine and beer sales.

That – as well as the likely jump in online orders for deliveries as Christmas approaches – should be good news for supermarket chains, many of which are listed on the stock market.

Takeaway delivery firms could also shine. Hollands says a bright note might come from Domino’s Pizza, one of the few UK-listed takeaway delivery companies. ‘Its first half year sales were up 4.8 per cent this year compared to 2019, despite switching off its store collection option during the lockdown period,’ he says.

Ben Yearsley, a director of Shore Financial Planning, agrees that Domino’s could profit. He also names Ocado – which has enjoyed a bumper start to its tie-up delivering M&S food – and the popular Just Eat takeaway delivery app as firms well placed to cash in as the 10pm curfew hits restaurant bookings.

Baillie Gifford UK Equity Alpha fund has Ocado as its biggest holding at £8 for every £100 you invest in the fund. Also in its top ten investments is Asos, which could benefit if stricter lockdown measures lead to deserted high streets and more people buying winter clothes online. JO Hambro UK Dynamic also has Morrisons and Tesco in its top ten stocks, as well as Vodafone, which Yearsley thinks could also hold up well. ‘You could argue that gambling stocks such as William Hill could do well, as sport is still on and with not a lot else to do, some may turn to gambling for entertainment,’ he adds.

STOCKING UP ON CLEANING ESSENTIALS

Ac cases of the virus rise, families who perhaps had started to relax are likely to take extra precautions in daily life. That could mean stocking up on cleaning products and medicines.

Shares in Reckitt Benckiser, which makes Dettol, Harpic and Cillit Bang among other well-known household products, are up 22 per cent this year so far.

Streeter, at Hargreaves Lansdown, says discount retailer B&M is also likely to benefit. It is a prime candidate for families stockpiling as it sells all sorts of home essentials – dishwasher tablets, rubber gloves, face masks, cheap duvet sets and kitchenware – often at lower prices than the big supermarkets. Streeter says: ‘Consumers fearful of another full lockdown may start to stock up on essentials to avoid the shortages we saw last time.

‘With people also worried about their incomes, B&M should benefit as a value retailer, given that consumers often trade down from higher-end supermarkets when times are tough.’

TIME FOR A ‘FLIGHT TO SAFETY’?

With more uncertainty ahead, one trend that could return is a so-called ‘flight to safety’. This typically means buying gold and so-called defensive stocks.

Investors turn to gold when worried about wider stock markets. Similarly, companies whose products are in demand during bad times as well as good are classed as ‘defensive’ investments and become popular in times of fear.

The Covid-19 crisis has been no exception: gold miner Fresnillo’s share price has doubled in 2020, for example. Richard Hunter, from Interactive Investor, says: ‘Any further spikes in the price of the precious metal could bode well for Fresnillo’s prospects.’

Another stellar rise has come from the gold mining company Petropavlovsk, with the share price up by 166 per cent in the year so far.

Emma Wall, head of investment analysis at Hargreaves Lansdown, says: ‘As we enter yet more economic uncertainty, backing businesses with strong balance sheets and global revenues is a sensible choice. For investors who are more cautious about the outlook for stock markets – and with good reason considering coronavirus, Brexit and the US election – a mixed-asset fund hedges your bets.’

She tips both Troy Trojan, which is up 7.4 per cent this year, and Pyrford Global Total Return, which is down 0.3 per cent this year. Both funds invest in a mixture of stocks, bonds, cash and gold. ‘The fund managers prioritise preserving your capital over out and out growth,’ Wall says. Of the two, she says Pyrford is the more cautious.

ANOTHER BOOST FOR GLOBAL TECH GIANTS

Stock market analysts had started to wonder whether the huge gains in share prices for US tech giants such as Amazon, Microsoft, Apple and Facebook may have run their course. These companies have been some of the biggest winners from Covid as businesses have had to adapt to remote-working and as friends and family have used technology to stay in touch.

But with the latest lockdown measures due to last another six months – and potentially stricter ones on the way – these companies could be in for another boost.

Richard Hunter points to the Scottish Mortgage investment trust as one way to make money from this trend. It is up 66 per cent in the year to date, turning £10,000 into £16,600 – largely thanks to its exposure to the US tech stocks.

The F&C Investment Trust is a big backer of tech. It is 150 years old but has a very modern investment portfolio in which a fifth of its assets are in technology firms.

Amazon, Microsoft, Apple, Facebook, Alphabet and Alibaba all feature in its top ten. And it is global, with four-fifths of its assets spread outside of the UK, across a variety of sectors.

It is also important to think beyond the second wave, she says. ‘We are increasing exposure to companies who can thrive throughout rolling lockdowns.’