David Moyes might be a manager who likes to suffer on the touchline and feel the pressure of the game but he could probably get used to this.

Sunday evenings, at home on the sofa, with his feet up and the widescreen TV turned to BT Sports, with refreshment to hand, as he feasted on his team’s display against Wolves, a second victory in six days since he was ordered into isolation.

Assistant boss Alan Irvine took the strain at the London Stadium and coach Stuart Pearce sat by the phone to stay in contact with Moyes, who tested positive for Covid-19 ahead of a Carabao Cup tie against Hull last week. 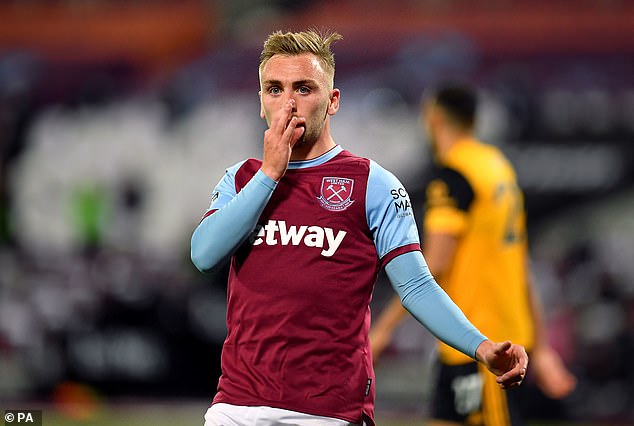 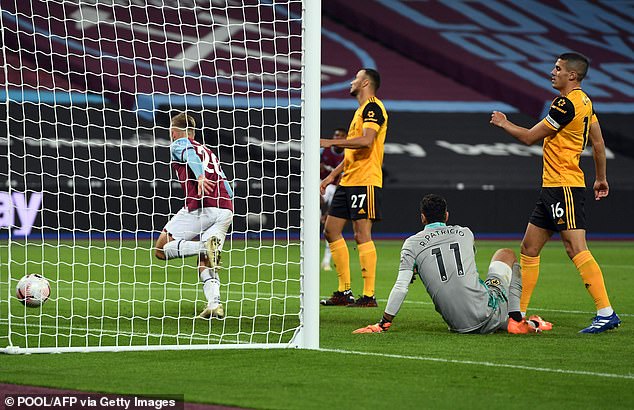 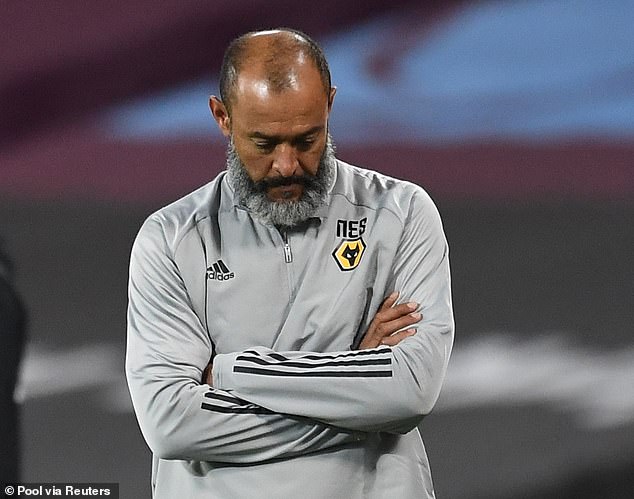 The Hammers manager is more likely to have taken to his remote control dressed in his tracksuit and boots, pacing the front room.

Still, he could have been forgiven had he changed channels to catch the end of Antiques Roadshow or Family Fortunes once his team went 3-0 up, early in the second half, courtesy of two goals from Jarrod Bowen and one from Tomas Soucek, which came with the help of a deflection.

Moyes, were he tempted, would have missed Sebastien Haller heading in a fourth in stoppage time to complete a convincing victory. Unfortunately, for Wolves boss Nuno Espirito Santo, there was no such option.

‘Very bad,’ said Nuno. ‘Unbalanced, disorganised, losing duels. Offensively, we didn’t create, we were not able to break West Ham. Every counter-attack was a chance at goal and it created anxiety in the team. Not good at all, very disappointing.’ 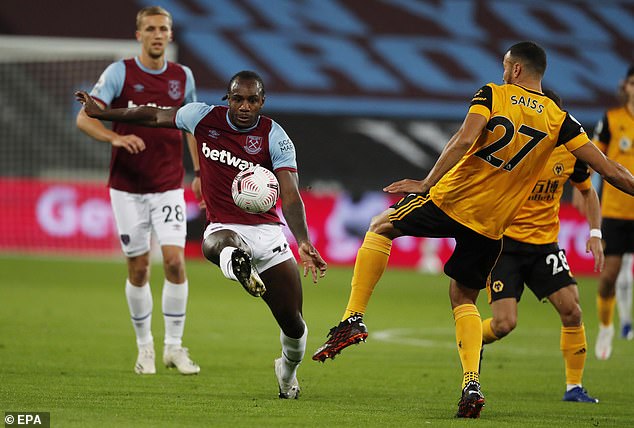 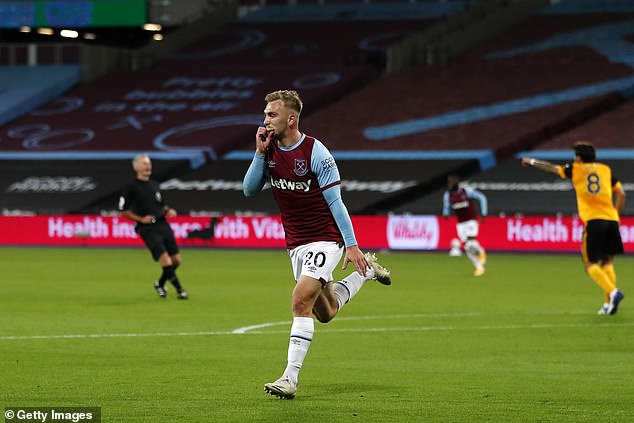 West Ham, already into the last 16 of the Carabao Cup, are off the mark with their first points of the Premier League campaign and some of the angst accompanying the start of a new campaign at the club can ease.

Bowen’s first goal since February gave the Londoners the initiative. Pablo Fornals released him with a quick free-kick from midfield, after Willy Boly flattened Michail Antonio.

Bowen jinked inside from the right, drove into the penalty area and curled a wonderful shot around Roman Saiss and inside the far post, out of Rui Patricio’s reach.

Wolves boss Nuno disputed the free-kick, claiming it was taken from the wrong place and that the ball might have still been rolling. Fornals did not stop the ball but, as Antonio and Boly tangled on the turf, he sized up the situation in a flash and fizzed a pass to Bowen. 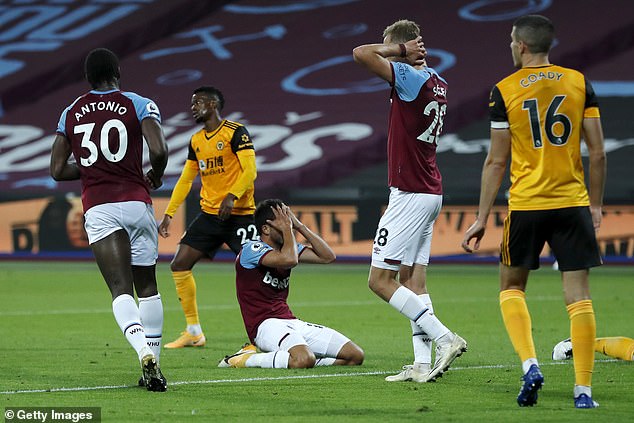 Referee Martin Atkinson and his assistants were happy with it. West Ham were ahead and ought to have scored more before half-time.

Patricio made three fine saves, each one better than the last. One from Antonio and two from Soucek. The second from Soucek was a terrific reaction save, low close to his feet to keep out a strong header at the back post.

Wolves were unzipped with ease on the turnover, in the first half. West Ham defended the edge of their own penalty area impressively, Declan Rice’s distribution out of defence made them dangerous on the break, and the visitors were hustled into mistakes on the ball, deep in their own territory.

Fornals should have extended the lead two minutes before the interval. Patricio saved again from Antonio but could only push his drive towards the penalty spot. Fornals arrived with the goal open and cleared the goal with comfort. 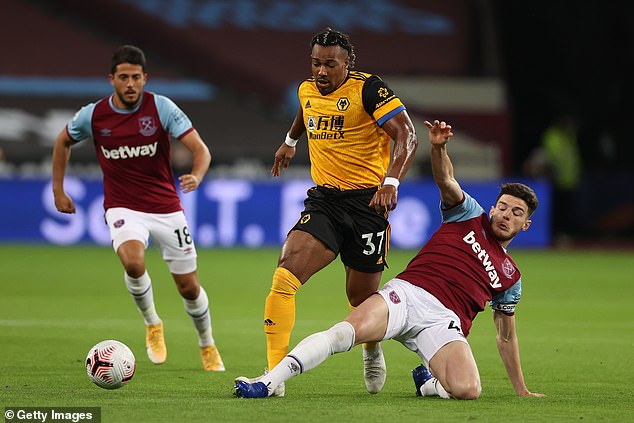 It was an awful finish and yelps of anguish came from the West Ham technical area and rang around the empty stadium.

Belatedly, Wolves stirred, perhaps realising they were fortunate to be only a goal adrift. When Pedro Neto summoned their first effort on goal, it was little more than a routine save for Lukasz Fabianski but it seemed significant as it represented their arrival in the contest.

Briefly they performed with greater purpose and intensity, although their vulnerability on the counter-attack allowed Bowen to score his second and end hopes of a fightback. 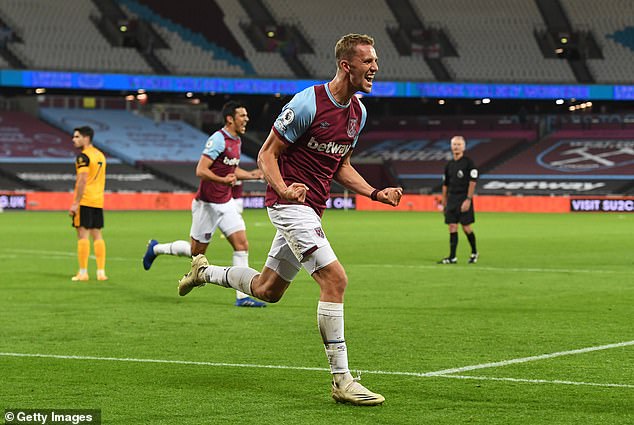 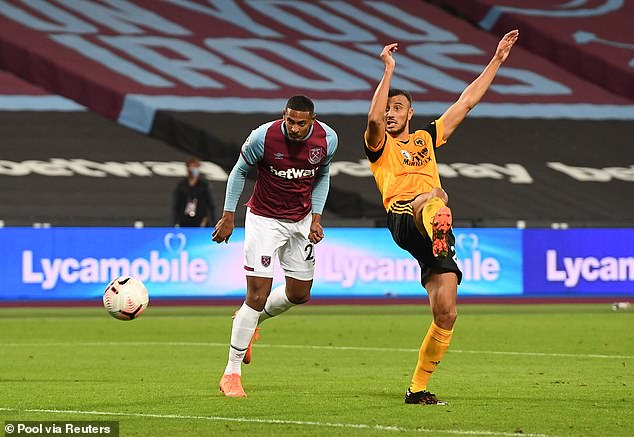 Antonio ran the ball down the West Ham left and picked out Fornals, who took a touch and went for goal from just outside the penalty box. His effort thumped into the post and popped out to Bowen who tapped it into the net.

Bowen went close to a hat-trick as he arrived to meet a cross from Arthur Masuaku. The ball flashed wide, although West Ham’s third of the evening soon followed.

Aaron Cresswell’s corner was met at the near post by a glancing header from Soucek and Patricio was deceived as it clipped Raul Jimenez on the chest and flew into the goal.

Haller came off the bench to score the fourth from another terrific Masuaku cross. ‘The players were outstanding,’ said Irvine. ‘It was a fantastic performance against a very good team and we could have scored more.’

West Ham have won twice and scored nine without Moyes, who has the all clear to return on Thursday but who might think twice about rushing back.