By Ian Randall For Mailonline

Wearing face masks can lull people into a false sense of security — making them more careless and less likely to follow social distancing rules, a study has found.

Psychologists from the Warwick Business School found that people felt more comfortable sitting or standing closer to others while wearing a mask.

Furthermore, people appear happy to keep a smaller distance from other who are also wearing face masks, the researchers reported.

These effects were more pronounced among those people who believe that face masks are effective at preventing the spread of coronavirus.

Given this, it could be difficult now to reestablish social distancing measures if they are needed in the event of a second wave of cases, the researchers warned.

The results appear to support the opinion of the Swedish Public Health Agency’s chief epidemiologist, Anders Tegnell, who has been critical of face masks.

He said that the evidence in support of their effectiveness is ‘astonishingly weak’ and that they encourage people to feel complacent about gathering in close proximity.

However, the findings contradict those of another recent study, which concluded that face mask wearers are 13 times more likely to keep up social distancing. 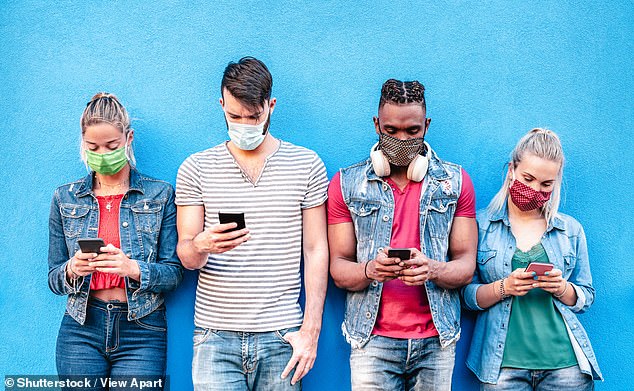 Wearing face masks can lull people into a false sense of security — making them more careless and less likely to follow social distancing rules, a study has found (stock image)

‘Our findings appear to be a classic case of risk compensation,’ said paper author and cognitive psychologist Ashley Luckman of the Warwick Business School.

‘Wearing masks brings down the overall risk of spreading COVID-19, so people feel safer and are more willing to take other risks, such as decreasing the physical distance between them and others.’

‘If the Government’s aim is to minimise transmission of the virus, its guidelines must be clear enough to prevent this trade-off, emphasising that masks are not an alternative to social distancing.’

In their study — conducted before it became mandatory for face coverings to be worn in shops in England — Dr Luckman and colleagues showed 800 participants in the UK pictures of people sitting, standing, or walking.

Each person was asked to indicate how close they would be willing to stand to the individual in the photograph in different scenarios, including indoor and outdoor settings — as well as whether both people, just one, or neither wore a face mask.

The team found that, in each scenario, people were more likely to tolerate a reduced distance between themselves and others if they or the other person wore a mask.

In fact, participants wearing a mask reported feeling comfortable standing just 1.8 metres from others on average — compared with wanting to keep more than two metres apart without a face covering.

According to the researchers, those with the strongest belief that masks would help prevent them from catching COVID-19 were the most prepared to stand closer to others if they wore masks.

However, those who believed themselves to be at the greatest risk of being admitted to hospital due to the virus were more likely to want to keep their distance. 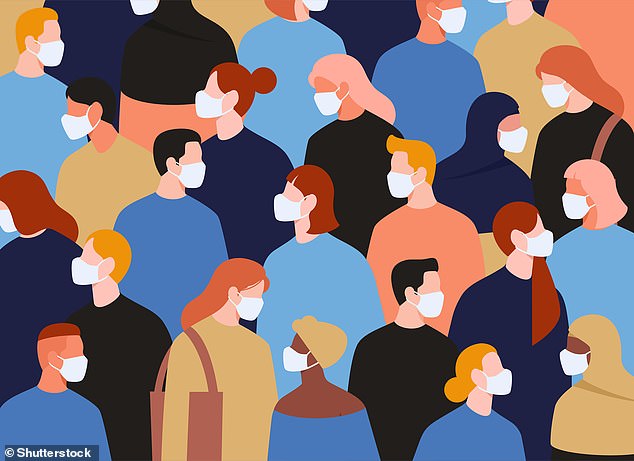 The findings suggest that it could be difficult now to reestablish social distancing measures if they are needed in the event of a second wave of cases, the researchers warned

‘Our results could be particularly relevant for countries where mask usage is now high, but social distancing guidelines have been relaxed,’ said paper author and behavioural scientist Daniel Read, also of the Warwick Business School.

‘If countries need to return to greater levels of physical distancing due to a second wave of cases, that may be harder to implement than it was when mask use was low at the start of the pandemic.’

‘We need more evidence to determine at what point the risks of reducing physical distance outweigh the benefits of wearing a mask,’ he added.

‘Clearly, the greatest benefit results from using masks to complement social distancing, rather than replacing it.’

A pre-print of the researchers’ article, which has not yet been peer-reviewed, can be read on the OSF Preprints website.