‘To whom it might concern, f*** you’: Valtteri Bottas takes swipe at his ‘critics’ after emerging from Lewis Hamilton’s shadow to cruise to victory at the Russian Grand Prix

By Dan Ripley for MailOnline

Valtteri Bottas took a swipe at his critics following the Russian Grand Prix after he took advantage of an uncharacteristic Lewis Hamilton error to win in Sochi.

The Finn cruised to victory at the circuit after his Mercedes team-mate was handed two five-second penalties following pre-race infringements that saw him penalised for practising race starts outside of a designated area.

Having started in third, Bottas scythed past Red Bull’s Max Verstappen before he took advantage of Hamilton serving his 10-second penalty in the pit-lane, enabling him to inherit the lead. 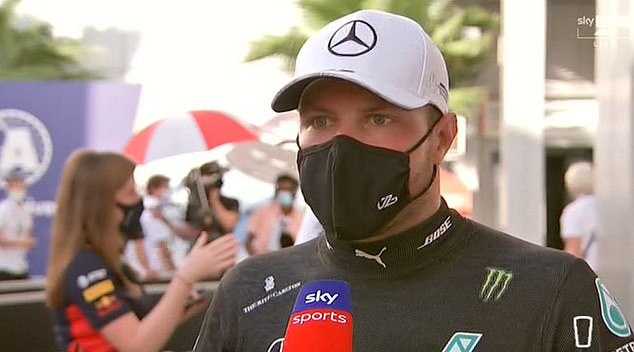 After building up a comfortable margin over Verstappen he eventually took an easy victory and his first since the opening race of the year in Austria.

It’s been a season dominated by Hamilton, which has led to many criticising the Finn for failing to lead a credible title challenge.

However on the team radio following his win he launched into a foul-mouth tirade, saying: ‘To my critics and to whom it might concern, f*** you.’ 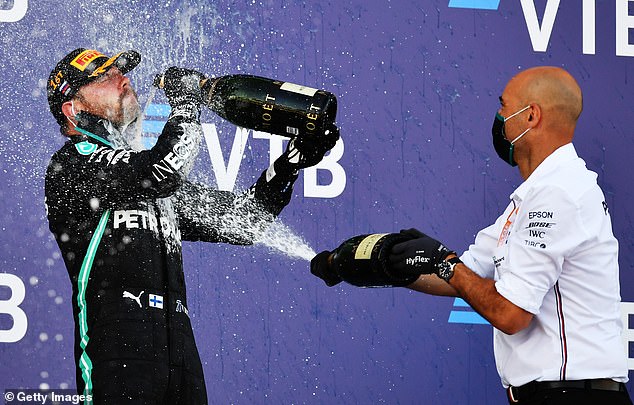 Bottas celebrated his victory on the podium with traditional champagne spraying

The rant was a nod to the Australian Grand Prix last season when in the opening race he uttered a similar quote after taking victory.

Following the race he admitted he had been lucky to pick up his second win of the season but that he was due a slice of fortune as he explained his radio outburst.

‘It comes from inside,’ he told Sky Sports. ‘It’s a build up of a few disappointing races and obviously giving everything every single this week and being this close to a win, and finally we got it and finally things went my way as well. 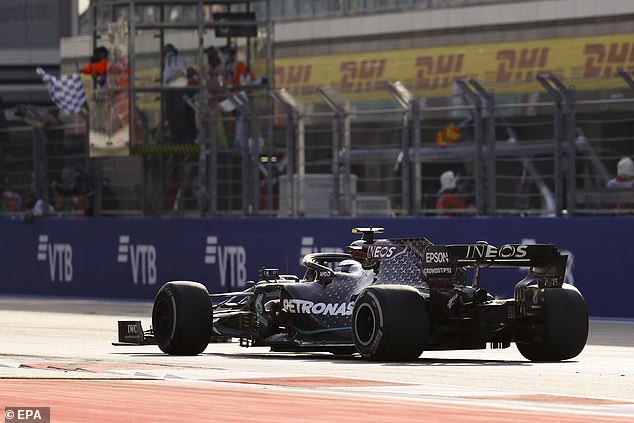 ‘I consider myself a bit lucky today I suppose. I take it, I feel like I earned it. The race pace was really good so that’s why it was a bit of a burst.

‘You know the critics and people who tell me I shall give up and so on. It gives me so much energy and power but I hope they can learn something. I don’t understand why they do it.

‘Now I really hope I can carry the momentum. It was a strong race for me. Everything was under control.’ 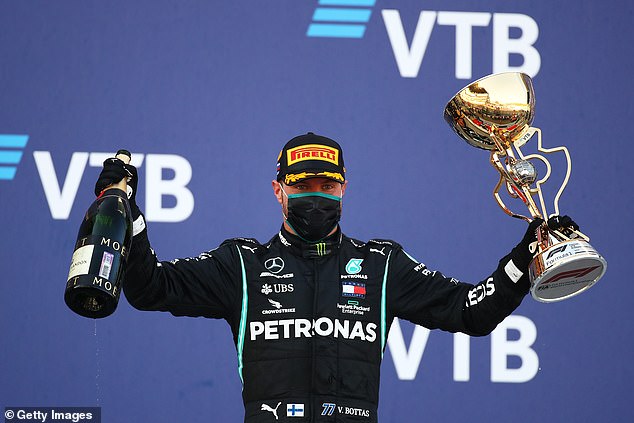 Following his 26-points haul – including a point for fastest lap –  Bottas now trails Hamilton by 44 points in the world championship with seven races to go, and insists he can still deny his team-mate a record equalling seventh world championship.

‘You need this result to gain confidence and I’m really, really pleased I can get this win now and it means the championship is not over,’ he added.

‘There is not much to lose from my side so I’m definitely going to go for it and hope things will keep going my way as well, not just one race. As I always say I will keep pushing and I won’t giveup.’