Lockdown rules will be loosened in eight areas of Northern England from next Wednesday, September 2, the Department of Health has confirmed.

Bolton, Stockport, Trafford, Burnley, Hyndburn and parts of Bradford, Calderdale and Kirklees will be afforded more freedom to meet other people from next week.

More than a million people living in Greater Manchester, Lancashire and West Yorkshire had been banned from meeting people from other households since July.

But these rules will now be lifted for those living in all parts of the boroughs except Bradford city, Keighley, Halifax, and Dewsbury and Batley in Kirklees.

Falling infection rates in those areas have led officials to soften restrictions to bring them into line with the rest of the country.

It means businesses such as beauty salons, indoor play areas, bowling alleys and ice rinks will also be able to open after being held back when they reopened in the rest of the country on August 15.

But not everyone was happy about the lifted rules – the leader of Trafford’s council said the Government had made the decision to relax restrictions without consulting locals, who feared it was too soon and said they should remain for public safety.

Leicester, however, must remain under its current lockdown rules for another two weeks until at least September 11. It was the first part of the UK to lock down and has now faced extra rules for two months.

Birmingham, which had been touted as the next area to face the dreaded rules, has escaped Government action but officials have raised serious concerns about the nearby borough of Sandwell, as well as Stoke-on-Trent and Swindon. 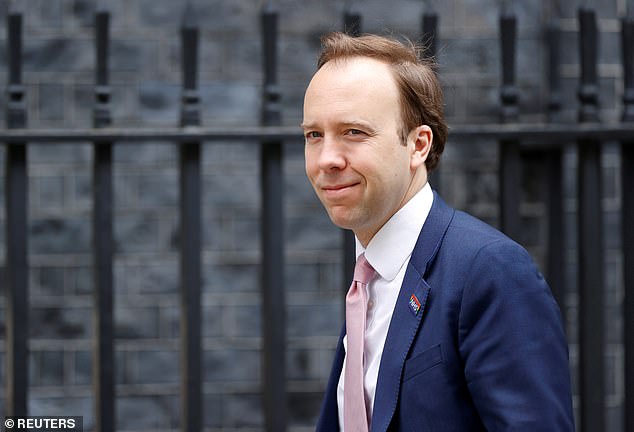 Health Secretary Matt Hancock chaired a ‘Gold Command’ meeting yesterday to discuss further action in badly-hit areas, and the Department of Health has today announced the results of the meeting 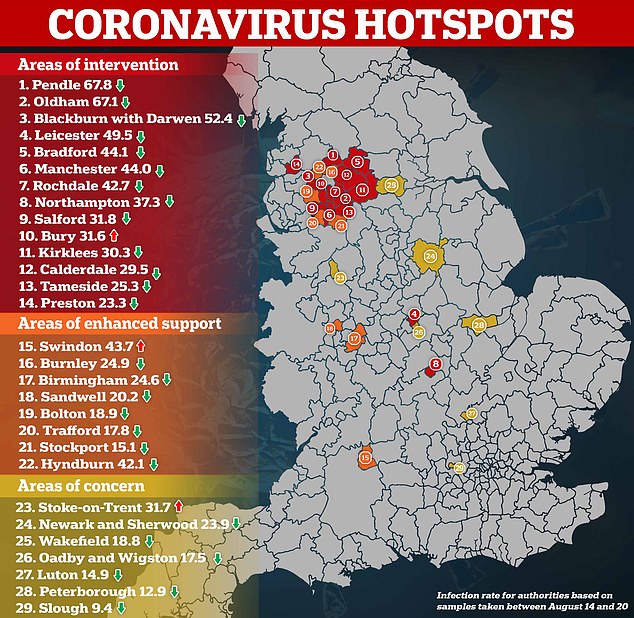 ‘We brought in measures to protect people in these parts of Northern England, and I want to thank residents who have worked so hard to get on top of this virus,’ Matt Hancock said today.

‘We’re seeing the positive results of our local approach, and are able to bring in increasingly targeted measures. It is vital we can maintain this good progress.’

The areas that are having rules relaxed will now be allowed to have two households mix indoors or outdoors in line with social distancing rules still in place nationwide.

It is tumbling infection rates that have encouraged officials to loosen the rules and to release residents from town-specific lockdowns. 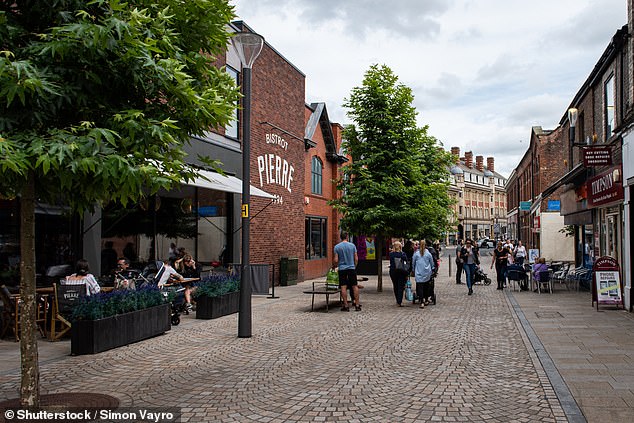 Trafford will be among the areas of Greater Manchester released from local lockdown rules. Pictured: A high street in the Trafford town of Altrincham

A Public Health England report shows Pendle and Oldham, which remain in lockdown, have the highest infection rates in the country, each with 67 cases per 100,000.

The North and Midlands are the only parts of England to be affected by local lockdowns so far.

Birmingham came close to having tougher restrictions imposed on it this week but has made a ‘remarkable’ turnaround in its fortunes and kept cases under control.

England’s second city, home to 1.1million people, became an area of ‘enhanced support’ last week after recording an infection rate above 30 per 100,000.

But extra testing and legal powers to crack down on businesses not following the rules has kept the infection rate down, reducing it to 24.6 per 100,000. 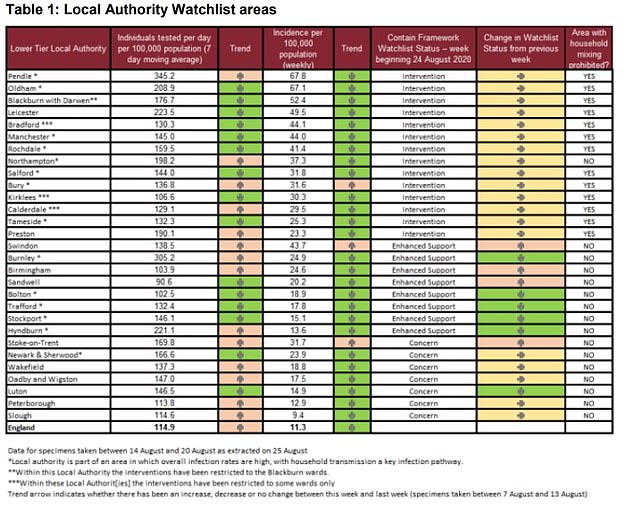 There are now 29 areas of England on PHE’s watchlist, with Stoke-on-Trent the only area to appear on it for the first time this week. Swindon, Birmingham and Sandwell have become bigger concerns for officials than they were last week

Politicians in Trafford, however, were angry that lockdown rules had been lifted and said that local authorities had not been consulted.

Andrew Western, the council’s 34-year-old leader, said ‘nobody has bothered’ to talk to him about the loosening of the rules.

In a statement from the Trafford Labour group which controls the council, angry local politicians said: ‘Whilst we accept that there will be a range of views from residents on this – and that we all want to see restrictions lifted safely as soon as possible – in line with the advice of our Director of Public Health, Trafford Council did not this week request the lifting of local lockdown restrictions.

‘Instead we asked for another week or two of local restrictions in the interests of public safety.’

The councillors said that the infection rate had increased since Public Health England’s last data was collected and they were afraid it would get worse as children return to school next week.

The team added: ‘This action by Government makes a mockery of the claims of locally led decision making and once again shows that local government is being ignored in spite of being on the front line of this crisis.’

Another city not faring as well is Stoke-on-Trent, which has this week been added to PHE’s watchlist for the first time. It is the only new addition to the list.

The Staffordshire city is now a designated ‘Concern’ and will be watched closely over the next week to see whether officials need to make extra efforts to stamp out the virus.

Areas that receive extra support from the Government generally have mobile swab testing units set up so people can be tested faster.

A change in the local lockdown strategy means that, in future, councils will be asked to help arrange restrictions on a highly specific ward-by-ward basis.

This is borne out in changes this week as parts of Calderdale, Bradford and Kirklees will be removed from lockdown but others must remain.

Stricter lockdown rules are now enforceable by law and people can be fined hundreds of pounds if they do not follow Government advice.

People who are caught not wearing face masks when they should – such as on public transport or indoors in public spaces – can face a penalty of £100.

People living in Pendle and in the northern part of Blackburn with Darwen will still not be able to socialise with anyone outside their household and should only use public transport if essential.

Gary Hall, deputy chair of the Lancashire Resilience Forum which is leading the county’s response to the coronavirus pandemic, said: ‘In most parts of Lancashire things are heading in the right direction and I would like to thank everyone for playing their part.

‘I understand how difficult it has been and appreciate the sacrifice people have made.

‘If we continue on this path I am hopeful that all parts of Lancashire will have the remaining restrictions lifted soon.

‘But this depends on people following the rules wherever they live in the county, and continuing to practice social distancing, washing hands regularly, wearing a face covering when they should and following the guidance given to them if contacted by NHS Test and Trace.’

Bradford, Calderdale and Kirklees councils in Yorkshire have all issued statements calling for their local lockdowns to come to an end.

The Government’s messaging on local coronavirus restrictions has been ‘confused and bungled’, they said.

The leaders of those councils joined their counterparts in Greater Manchester in criticising proposals to tackle the virus on a ward-by-ward basis.

WHAT ARE THE NEW LOCAL LOCKDOWN RULES?

Any changes to lockdown rules will come into force on Wednesday, September 2. Until that time, current restrictions remain in place.

From next Wednesday the following situations will apply:

Bradford: Indoor gatherings between households will continue to be banned and some businesses forced to remain closed in all wards except: Worth Valley, Craven, Ilkley, Baildon, Bingley, Bingley Rural, Shipley, Wharfedale, Windhill and Wrose. In those areas national guidelines will apply.

Calderdale: Indoor gatherings between households will continue to be banned and some businesses forced to remain closed in all wards except: Brighouse, Calder, Elland, Greenland and Stainland, Hipperholme and Lightcliffe, Luddendenfoot, Rastrick, Ryburn, Todmorden. In those areas national guidelines will apply.

Leicester: Leicester remains in the same lockdown as before. Indoor gatherings of different households are banned and leisure sector businesses remain closed. This will next be reviewed on September 11. People can visit non-essential shops, hairdressers, pubs and restaurants etc as usual. People can leave the city but not to meet others from different households.

Greater Manchester: Indoor meetings of two or more households is banned in Manchester city, Salford, Rochdale, Bury and Tameside. Otherwise national rules apply. In Oldham, the same rules apply and people are urged not to meet up with others even outdoors.

Lancashire: In Pendle and Blackburn with Darwen people should not meet up with others from different households either indoors nor outdoors. Some businesses and organisations remain closed. Indoor household mixing is banned in Preston.