Getting suspected heart attack patients to spit into a tube could help diagnose them six times faster than blood tests currently used.

Scientists have managed to process saliva in a way that allows standard testing kits to pick up on tell-tale signs of the deadly event in just 10 minutes.

In contrast, blood tests that look for the same chemical — called troponin — take at least an hour to achieve the same result.

Researchers in Israel said the first trials of the method showed it was 84 per cent as accurate as the commonly-used blood test.

Troponin is a protein that helps to regulate the heart’s function and is dumped into the bloodstream when someone’s heart is damaged during a heart attack.

Finding it in the blood is how doctors can tell for certain if someone’s symptoms are actually down to a heart attack. Not everyone has obvious symptoms, and the typical chest pain, light-headedness and breathlessness can be caused by other illnesses. 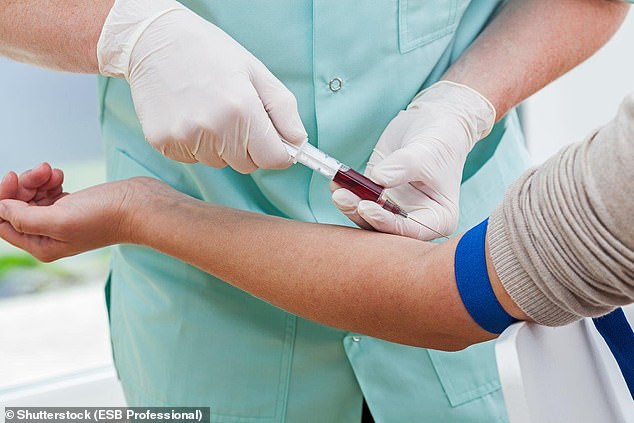 Doctors normally have to do a blood test (stock picture) to look for troponin in the blood, which can indicate that someone has had a heart attack

Heart attacks lead to more than 200,000 hospital visits every year in the UK and there are more than 1.4million living survivors. In the US some 805,000 people have a heart attack each year.

They happen when the blood supply to part of the heart is cut off and a bit of the muscle is starved of oxygen, which can kill or permanently damage it.

The heart does not generally stop completely when someone suffers an attack — that is called a cardiac arrest, which is much deadlier.

To test whether someone has had a heart attack, doctors test their blood to look for the protein troponin.

They also consider their symptoms and carry out an electrocardiogram (ECG) to check the heart’s activity.

If troponin is in circulating blood it usually means someone has had a heart attack because the protein is released into the body when the heart is damaged.

It is vital to diagnose a heart attack quickly because finding out how severe it is can dictate what treatment someone needs.

The current test to find troponin can take more than an hour, so scientists at the Soroka University Medical Centre in Be’er Shiva, Israel, wanted to find a faster way.

‘There is a great need for a simple and rapid troponin test for patients with chest pain in the pre-hospital setting,’ said Dr Roi Westreich.

Boys who suffer from anxiety or depression in their teenage years are more likely to have a heart attack by the time they reach middle age, a study has found.

Research that followed almost 240,000 men for up to 40 years from the 1950s found that their circumstances when they were 18 or 19 had a strong bearing on their adult life.

All men had joined compulsory military service between 1952 and 1956 – the study was done in Sweden – and did mental health questionnaires at the time.

Follow-up research tracking their health in middle age, up to the age of 58, found that the men who had anxiety or depression when they enlisted (35,000 of them) were more likely to have had a heart attack by the time they reached their late 50s.

This increased risk was found to remain true even when the men’s weight, blood pressure, wealth and general health when they were teenagers were taken into account.

The scientists, at Örebro University, said the men with mental health issues were less likely to stay fit into adulthood and more likely to be unhealthy, abuse alcohol and smoke.

Dr Cecilia Bergh urged parents: ‘Be vigilant and look for signs of stress, depression or anxiety that is beyond the normal teenage angst: seek help if there seems to be a persistent problem.

‘If a healthy lifestyle is encouraged as early as possible in childhood and adolescence it is more likely to persist into adulthood and improve long-term health.’

The research was presented at the European Society of Cardiology Congress.

Dr Westreich and colleagues processed and tested the saliva of people who had had heart attacks – and people who hadn’t – to see if they could spot troponin.

They found the saliva test accurately diagnosed 84 per cent of 32 people (27) who had been diagnosed through the gold standard blood test.

And the best thing about the saliva test was that it only took 10 minutes to produce the result, which was at least six times faster than the blood test.

The same testing kit that is used for blood could be used on the saliva, they found, as long as the spit sample had been processed first to remove other proteins that could confuse the test.

If the saliva wasn’t processed first, the test could only correctly diagnose six per cent of the heart attack patients (two out of 32).

Of 12 healthy patients, none were falsely diagnosed with heart attacks, showing that the test did not see troponin when it wasn’t present, which is vital to ensure people aren’t given treatment or surgery they don’t need. Blood thinners, for example, can cause excessive bleeding or bruising so should not be given unnecessarily.

It is not clear how long before the tests the troponin-positive patients had had their heart attacks.

Dr Westreich said: ‘Since no test has been developed for use on saliva, we had to use commercially available tests intended for whole blood, plasma, or serum, and adjust them for saliva examination.’

He added: ‘This early work shows the presence of cardiac troponin in the saliva of patients with myocardial injury.

‘Further research is needed to determine how long troponin stays in the saliva after a heart attack.

‘In addition, we need to know how many patients would erroneously be diagnosed with heart attack and how many cases would be missed.’

The British Heart Foundation said the study was promising but there were still doubts about the accuracy of saliva testing.

Its associate medical director, Professor Metin Avkiran said: ‘Measuring troponin in the blood provides the gold standard for diagnosing a heart attack and this small study adds to previous research that measuring troponin in saliva could be a less invasive and faster alternative.

‘However, more work is needed to further develop such tests and determine if they are as reliable as the current blood tests.’

Dr Westreich and his colleagues presented their research at the European Society of Cardiology Congress today.

It will later be published in a paper titled ‘Development of saliva-based cTnl point-of-care test: a feasibility study’.

Napping for too long in the day could make you more likely to get heart disease or die young, according to scientists who presented their research at the European Society of Cardiology Congress.

In bad news for siesta lovers, researchers found dozing off for an hour or more each day could increase the risk of dying early or disease by a third.

Afternoon naps can be good for people who don’t sleep much at night, they admitted, but they should be kept short so they don’t add to health problems.

The exact reason naps can be dangerous isn’t certain but past research has found they can cause internal swelling called inflammation, which is bad for the heart.

It could also be that napping is an early sign of health problems for some people, and that they may be sleepy in the day because of looming ill health.

The study, done by researchers at Guangzhou Medical University in China, looked at 20 studies of more than 300,000 people, their nap habits and their health and deaths.

And it found the effect was worst on women, whose risk of dying prematurely rose by 22 per cent if they napped for more than an hour each day.

Dr Zhe Pan and colleagues looked at records from 313,651 people in more than 20 past studies, and found that four out of 10 admitted to napping regularly.

People who napped for more than an hour each time, they found, were a third (34 per cent) more likely to develop heart disease, compared to non-nappers.

And the risk of dying prematurely rose by 30 per cent.

If people slept for less than six hours a night, however, afternoon naps did not increase the risk of death or disease.

Dr Pan suggested that napping might actually be good for people who don’t get enough sleep at night.

‘The results suggest that shorter naps – especially those less than 30 to 45 minutes – might improve heart health in people who sleep insufficiently at night,’ he said.