Hope for a universal flu vaccine? Scientists discover which immune cells a shot MUST target to provide ‘long-lasting’ protection

By Natalie Rahhal Us Health Editor

A typical flu vaccine is only about 40 to 60 percent effective – but a new study may help scientists change that at long last.

Researchers at Washington University St Louis developed a method that can check whether a flu shot is targeting the right immune cells to trigger a relatively long-lasting response and block infections.

Their work uncovers one reason why some people who get flu shots may get only partial protection against the virus and suggests a way to make a more effective, longer-lasting vaccine.

It comes as scientists around the world work frantically to develop a long-lasting coronavirus vaccine and warn of the looming danger rof COVID-19 combined with the approaching flu season. 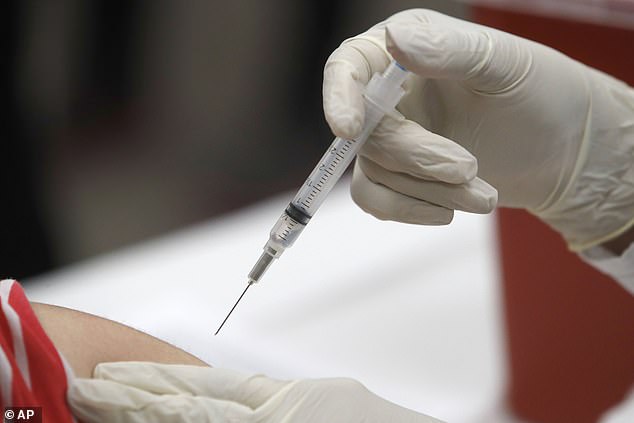 Washington University, St Louis, researchers discovered that testing lymph nodes can reveal whether a flu shot will offer long-lasting protection – but only about 38% of people tested in the small study have the desired immune response (file)

Any given year, about half of people who get a flu shot don’t really benefit from its intended protection.

The reasons for this high failure rate are several, complicated and still being researched.

For one, there are 131 potential strains of flu – although only four commonly circulate among humans each year, according to the Centers for Disease Control and Prevention.

Still, making a shot ahead of the each flu season involves guesswork about which ones will circulate most actively and approximation of a vaccine that can block as many strains as possible.

On top of this already complex process, scientists now suspect that our prior contact with any strain of flu – whether that’s from a prior infection or previous flu shot – might derail the effects of each year’s bespoke vaccine.

The new study offers some  crucial clues as to why and how to avoid the self-defeating pattern.

The immune system has its own memory system made up of B cells, which are produced in the bone marrow, then move to the spleen and lymph nodes to mature.

Some remain in the lymph nodes – gland distributed in various parts of the body, such as under the arms, in the neck and around the groin, while others make their way into the bloodstream and travel around the body.

Once a new virus or vaccine against it enters the body, some of these B cells become specified in to memory B cells capable of producing antibodies against the infection.

Those in the lymph nodes are known as ‘naive B cells,’ because they have not yet become sensitive to and capable producing antibodies against specific pathogens.

So when someone contracts a flu virus or a mock-version of it in a vaccine, the memory B cells in the bloodstream are likely to encounter it first, and start producing antibodies that might be a near match, but not a perfect one.

And that may keep the naive B cells in the lymph nodes from producing antibodies against new strains of flu upon yearly vaccination.

The Washington University team saw this in action. They carefully extracted B cells from eight young, healthy volunteers who got the 2018-2019 flu shot, which was a ‘quadrivalent’ vaccine, or one designed to produce antibodies to four strains of the virus.

The vaccine generated responses from both the memory and naive B cells in three of the eight volunteers.

That suggests that their immune systems ramped up an immediate response in the memory cells, but that the the naive ones were also being trained to recognize and provide longer-lasting immunity to the flu strains.

‘Our study shows that the influenza vaccine can engage both kinds of cells in the germinal centers, but we still don’t know how often that happens,’ said lead study author Dr Ali Ellebedy, an immunologist.

‘But given that influenza vaccine effectiveness hovers around 50 percent, it probably doesn’t happen as often as we would like.

‘That brings up the importance of promoting strategies to boost the germinal centers as a step toward a universal influenza vaccine.’

In other words, if scientists can develop a way to make the flu shot target these naive B cells and bypass the memory ones floating in the bloodstream, they might be able to make a more effective, even universal vaccine.