Pregnant women are less likely to show symptoms of Covid-19 but more likely to end up in intensive care than women who aren’t expecting, a study has found.

How the coronavirus affects pregnant women has been unclear throughout the worst of the pandemic and they were put onto the shielding list as a precaution.

While some research has found they don’t seem to be at any extra risk, a study published today finds they are more likely to get severely ill if they do get symptoms.

The paper reviewed 77 other studies that have been done around the world and found that pregnant women were 57 per cent less likely to show signs of illness.

Among those who did develop symptoms, however, the chance of being admitted to intensive care was 62 per cent higher than it was for other women. All the women in the study were already in hospital, so they may have had other health problems.

The virus, research showed, may also lead to a premature delivery and increase the chance of the baby needing to go onto a neonatal care unit.

Scientists, however, said the results were reassuring and showed pregnant women had ‘comparable outcomes’ to other women who caught coronavirus. 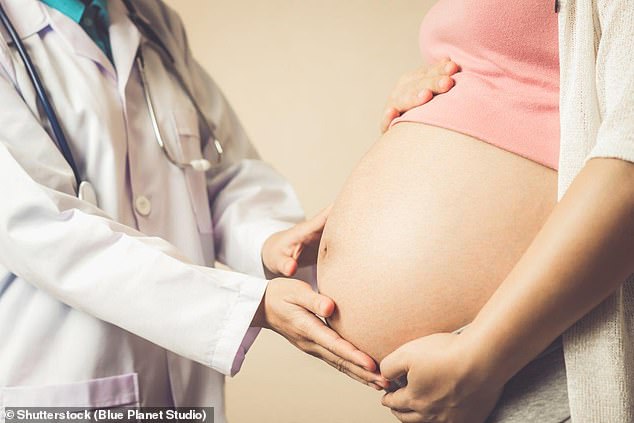 The research was done by a team called the PregCOV-19 Living Systematic Review Consortium, led by the University of Birmingham’s Professor Shakila Thangaratinam.

They looked at 77 studies already done on the effects of Covid-19 which included 11, 432 women who had been admitted to hospital and diagnosed with the viral disease.

The review found the pregnant women in hospital with coronavirus were 57 per cent less likely to have symptoms, but 62 per cent more likely to end up in intensive care.

In addition, there was an 88 per cent higher chance of them ending up on a ventilator.

Existing health problems in the mothers, including obesity, diabetes and high blood pressure, were strongly linked to the increased risks of intensive care and ventilation.

He said the findings of the study were ‘welcome’ and that women should follow Government guidance, which puts them in a ‘moderate risk’ group.

The NHS had advised pregnant women to shield themselves during the height of the pandemic.

On its website the health service says: ‘There’s no evidence that pregnant women are more likely to get seriously ill from coronavirus.

‘But pregnant women have been included in the list of people at moderate risk (clinically vulnerable) as a precaution.

‘This is because pregnant women can sometimes be more at risk from viruses like flu.

A study published by King’s College London in August found that healthy pregnant women do not face a higher risk of severe Covid-19 than women who are not expecting.

There were fears mothers-to-be would be more vulnerable to dying from the disease because their immune system is weaker during pregnancy.

But researchers quashed the concerns after analysing data from two million women from the UK, US and Sweden.

They found expectant mothers with no underlying conditions faced no greater risk of developing severe Covid-19 than women who aren’t pregnant.

But, similar to what has been seen in the general population, pregnant women with existing health conditions, such as lung, heart or kidney disease and diabetes, were more likely to end up in hospital.

The study done by the PregCOV-19 Living Systematic Review Consortium – in the main story on this page – took in all women, not just those who were healthy, which is why its results may appear different. The PregCOV-19 study accepted existing health problems as risk factors instead of ruling them out.

King’s College London academics, who led the research, said women with other illnesses should be monitored more closely.

Dr Erika Molteni said: ‘Although our findings should be reassuring for healthy women who are pregnant at this time, it highlights the importance of protecting those with underlying health conditions and keeping a close eye on them during their pregnancy, particularly if they start showing symptoms of COVID-19.’

‘It’s not clear if this happens with coronavirus. But because it’s a new virus, it’s safer to include pregnant women in the moderate-risk group.’

The study found that 73 pregnant women out of 11,580 women in the studies (0.6 per cent) had died after testing positive for Covid-19. Their causes of death were not explained, meaning they may or may not have been caused by the disease.

Preterm birth was more common among women with Covid-19 than those without, the scientists said, and a quarter of babies born to sick mothers had to go into a neonatal unit.

Those babies were at a three-fold higher risk of needing to be admitted than babies born to mothers without the virus, they said.

Professor Thangaratinam and colleagues wrote: ‘Pregnant and recently pregnant women are less likely to manifest Covid-19 related symptoms of fever and myalgia than non-pregnant women of reproductive age and are potentially more likely to need intensive care treatment for Covid-19.

Dr Morris, from the Royal College of Obstetricians, added that other evidence showed women from black, Asian and ethnic minority backgrounds were at greater risk of complications than white women.

‘It is important that pregnant women are aware that the absolute risks to their health from coronavirus are low,’ he said.

‘This study highlights a possible increase in the need for intensive care among pregnant women with coronavirus.

‘This is also true for pregnant women should they contract flu. This year, it is particularly important that pregnant women take up the offer of the free flu vaccine, which is safe in all trimesters of pregnancy, to protect them from becoming seriously unwell with flu.’

Dr Edward Mullins, a National Institute for Health Research lecturer at Imperial College, said: ‘This living systematic review is a useful resource for the healthcare community.

‘The review’s findings confirm the increased risk of pre-term delivery, but not spontaneous pre-term labour with SARS-CoV-2 infection and that women in pregnancy have comparable outcomes to women who are not pregnant – which is different to the worse outcomes seen in women in pregnancy with other pandemic respiratory viruses.

‘The findings of the review support ongoing social distancing measures for women in the latter stages of pregnancy to reduce the risk of pre-term delivery.

‘There are unanswered questions on the impact of SARS-CoV-2 infection in early pregnancy and on transmission from mother to baby in the womb which need to be addressed to further understand how this virus affects women in pregnancy.’

The study was published in the British Medical Journal.