A 75-year-old woman in Nottingham was the first known case of Covid-19 spreading in the UK because she gave a positive sample on February 21, scientists claim.

The woman, who later became one of the first three people to die of the disease, fell ill more than two weeks before officials admitted the virus was spreading in Britain.

Professor Chris Whitty, England’s chief medical officer, said on March 5, when the first death was announced, that it was ‘highly likely’ that community transmission was happening inside the UK.

The Nottingham woman had been given a routine swab for another health problem on February 21, and researchers have since reanalysed that and found out she was positive for Covid-19 at the time.

It had previously been thought that a man in Surrey — the 20th case diagnosed in the UK, on February 28 — was the first person to catch it on home soil.

Scientists say a policy of only testing people who had been to high-risk areas abroad meant thousands of coronavirus cases went undetected early this year.

Deaths could have been prevented and lockdown could have come sooner and softened the blow of the pandemic if the international travel rule hadn’t been used, they said. 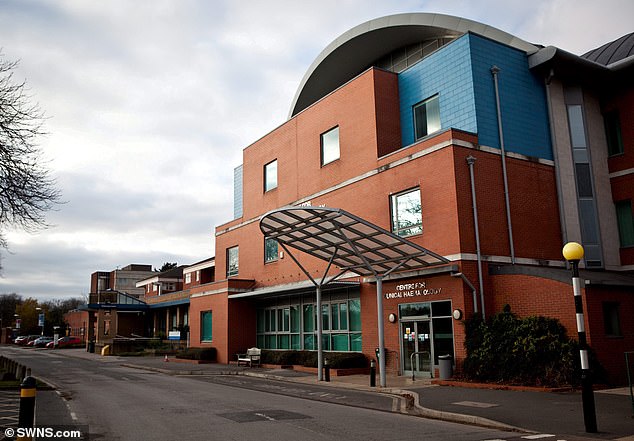 The woman later died and is understood to have been the first fatality recorded by University Hospitals Nottingham NHS Trust, on March 3. (Pictured: City Hospital which is run by the trust) 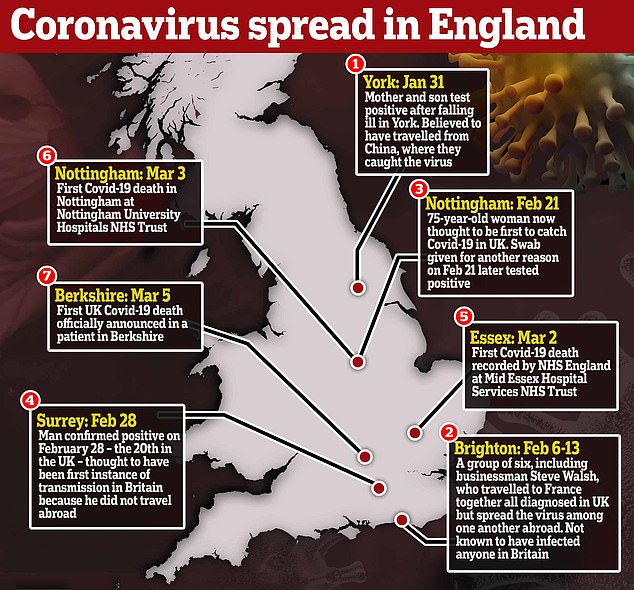 The researchers, led by the virologist Professor Jonathan Ball at the University of Nottingham, said: ‘Patient 1 in this study is, to the best of our knowledge, the earliest described community-acquired case of SARS-CoV-2 in the UK, admitted to hospital care on the 21st of February 2020’.

The scientists say the woman had given a nasal swab sample for another health problem – which was not named – on February 21.

To do their study the scientists had gone through 1,660 samples taken in Nottingham between January and March, to screen them for early cases of coronavirus.

Three tested positive, with the 75-year-old woman’s the earliest.

She later died and is understood to have been the first fatality recorded by University Hospitals Nottingham NHS Trust, on March 3.

That death on March 3 was one of the first three recorded in England.

Professor Ball and colleagues say they can be sure the woman caught the coronavirus in the UK because she had not travelled abroad in a reasonable time frame before giving the swab.

Their paper said: ‘No recent travel history or contact with a recently returned traveller was identified during care such that the PHE-defined case definition for SARS-CoV-2 testing at the time was not met.’

The paper claimed that the woman was also the first person to die of Covid-19 in the UK, but NHS England has a record of a patient dying in Essex a day earlier.

Mother and son test positive after falling ill in York. Believed to have travelled from China, where they caught the virus.

A group of six, including businessman Steve Walsh, who travelled to France together all diagnosed in UK but spread the virus among one another abroad. Not known to have infected anyone in Britain.

75-year-old woman now thought to be first to catch Covid-19 in UK. Swab given for another reason on Feb 21 later tested positive.

Man confirmed positive on February 28 – the 20th in the UK – thought to have been first instance of transmission in Britain because he did not travel abroad.

It is unlikely that the Nottingham woman is truly the first person to have caught the coronavirus on British soil, she may just be the first for whom there is a record.

The first cases were confirmed on January 31 in a Chinese mother and son who were staying at a hotel in York.

Professor Ball’s study acknowledges that these were the first cases in the UK but it is not clear whether transmission occurred between them in Britain, nor whether – if it did – it was considered community transmission.

The paper said: ‘The first confirmed SARS-CoV-2 case in the United Kingdom travelled from Hubei province on the 23rd of January 2020 and became symptomatic on the 26th of January.

‘This patient then transmitted the virus to a household contact, who also became symptomatic two days later.’

Professor Ball and colleagues said that the number of people who have died of Covid-19 in Britain could have been reduced if the Government didn’t have such a strict testing policy at the start.

In the early stages of the pandemic – throughout January, February and March – people in the UK could only get tested for coronavirus if they both had symptoms and had travelled to a high risk area abroad, or had been in contact with someone who had.

Testing stopped completely on March 12 because there simply weren’t enough tests available to use on anyone who wasn’t so ill they were in hospital.

This rule coincided with what is now believed to have been the peak of transmission in the country.

The peak of deaths – presumed to come approximately three weeks after the peak of cases – was around April 10, suggesting the most people were infected in the week ending March 22.

And with an approximate death rate of one per cent, the 1,122 deaths officially announced on April 10 suggest at least 112,000 people were sick at the time.

Professor Ball said: ‘Our data highlights the importance of timely and extensive community testing to prevent future widespread transmission of the virus.

‘Had the diagnostic criteria for COVID-19 been widened earlier to include patients with compatible symptoms but no travel history, it is likely that earlier imported infections would have been detected, which could have led to an earlier lockdown and lower deaths.

‘However, the capacity for testing available nationally was not sufficient at the time to process the volume of testing required with a broader case definition.

‘In order to prepare for any future pandemic such as this, the UK urgently needs to invest in and expand diagnostic capacity within NHS and PHE diagnostic laboratory services.

‘Any lasting investment in the human resources and associated infrastructure to achieve a more agile epidemic response both nationally and globally will undoubtedly save lives and drastically reduce the adverse impact of such outbreaks on the economy.’

The paper has been published without peer review on the website medRxiv.