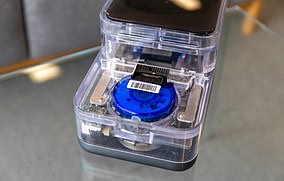 One of the new test kits, made by London-based DNANudge, will be launched next month. It analyses DNA in nose swabs but saves time as the results do not need to be sent to a laboratory

The DnaNudge test does not require any medical expertise and can detect the virus from just a nostril sample – much less invasive than some throat swabs.

After successful trials on 500 patients in London hospitals, the ‘lab in a cartridge’ device was approved for clinical use by the Medicines and Healthcare Products Regulatory Agency (MHRA) at the end of April.

The Government has purchased 5,000 of the DNANudge machines, which can process up to 15 tests a day, to provide 5.8 million tests in the coming months.

The test, developed by Imperial College London’s Chris Toumazou, is based on the design of a DNA test and can give a result in just over an hour, significantly cutting down on the 48-hour wait for a laboratory diagnosis.

Once a swab is taken, it’s inserted into a handheld reader that provides results within just 75 minutes.

The DnaNudge has a sensitivity of over 98 per cent and specificity of 100 per cent.

It can tell the difference between a person who doesn’t have the disease at all and a sample which wasn’t taken properly, meaning there aren’t any false negatives. 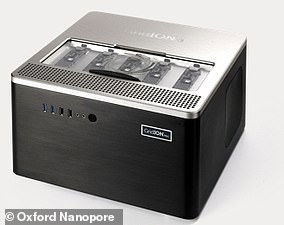 The other test, called the Lampore, involves taking a sample of saliva, unlike existing methods which require invasive and difficult nose and throat swabs

Biotech company Oxford Nanopore has developed a portable swab-recording device called LamPORE, which can determine whether a user has coronavirus in the space of an hour.

As well as being able to process around 30,000 samples a day, the device can also be used to determine whether hard surfaces in schools, hospitals and care homes have traces of COVID-19.

The LamPORE device, which also comes in a desktop version which is about the size of a printer, uses electronic means to record and analyse the samples.

Each test is given a barcode which is individually assessed before returning back with the result – without having to wait for swabs to be sent to the laboratory.

The portable version of the LamPORE device is believed to be the same size as a CD player.

Ministers are understood to have made an order for 450,000 of the tests, which were made available in adult care settings and laboratories last month.

Millions more are due to be rolled out later in the year if they prove to be effective.

The makers of the test have not revealed how accurate it is, and the Government has refused to divulge that information, too. 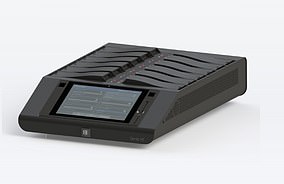 The Genie HT processes nasal and throat swab samples and can return results in 20 minutes without needing to be sent to a lab and processed.

Once swabs have been collected from patients, the samples are loaded into the devices, which look for tiny traces of the virus in their DNA.

The machines amplify the DNA billions of times chemically so they can detect the virus with extreme sensitivity.

The device has proven to be just as accurate as PCR swabs, which take days to give results, in clinical trials by Public Health England.

But the gadget is now being tested at a number of A&E departments, GP coronavirus testing hubs and care homes across Hampshire.

Up to 4,000 people of all ages have been involved in the trial, which is being led by Hampshire Hospitals NHS Trust.

In contrast to the widely used PCR tests, which need be processed at different temperatures, the Genie HT does not require a change in temperature to detect results. 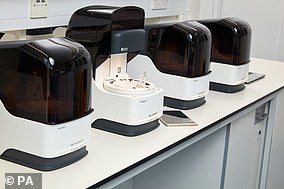 The SAMBA II has shown to be almost 99 per cent accurate at analysing swabs and can give a result in just 90 minutes.

The portable machine can diagnose Covid-19 in less than 90 minutes, but only has the capacity to process 15 tests a day.

It was developed by University of Cambridge spin-off company Diagnostics for the Real World.

It scours DNA in throat and nose swabs to detect the virus.

Addenbrooke’s Hospital in Cambridge has been trialling the device since April.

They have shown to be so effective that the hospital switched nearly all of its coronavirus testing from standard lab tests to the Samba machines in May.

A Samba test, costing approximately £30 per sample, would outweigh the cost of each additional bed day at around £200 ‘many times over’, the team said.

Its creators say the tests have been validated by Public Health England and are expected to be launched in hospitals across the country.

The machines are already used to diagnose other blood-borne diseases like HIV and hepatitis C. 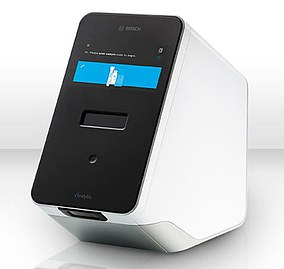 The Government partnered with Northern Irish firm Randox in April to ramp up testing in the nation.

It has been scaled up across multiple hospitals in Northern Ireland.

The device is also used at the point of care and operated by a healthcare professional.

Randox says its device works by ‘identifying SARS-CoV-2 and differentiating it from nine other respiratory infections with similar symptoms, including influenza and all known coronaviruses’.

The devices are still being trialled.

Last month, 750,000 swabs were recalled after they failed to meet the required safety standards.

Randox said the issue was with one of its suppliers of its swabs.

The machines which process the swabs have not been deemed unsafe. 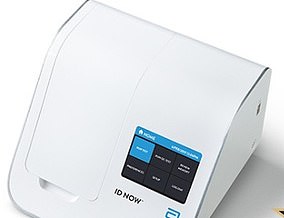 American giant Abbott developed a rapid antigen test thought to be the quickest on the market.

It quickly became the most widely available molecular point-of-care testing platform in the States.

It is unclear if Public Health England is looking into the device. 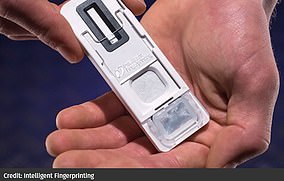 The test is said to take just 10 minutes to produce a diagnosis. It works by collecting fingerprint sweat onto a small test cartridge for analysis. The sample is then analysed by a portable DSR-Plus analysis unit.

Its makes say the test is more hygienic and has less chance of being done wrong because it utilises sweat samples rather than a throat or mouth swab. It’s unclear how accurate the test is or whether UK ministers are looking into it.