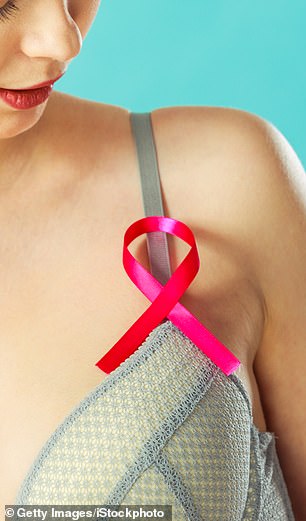 This would, in turn, reduce the effect on their breast shape and lower the risk of potential complications and psychological effects.

Normally, when a breast cancer patient has chemotherapy before surgery, they will have scans afterwards to see if the tumour has shrunk.

By using VAB alongside the scans, the doctors think they can say with greater accuracy the size of the tumour, and potentially spare patients surgery if the cancer has been eradicated.

More than 30 per cent of the 55,000 women diagnosed with breast cancer each year in the UK have chemotherapy to try to shrink the tumour, so it is easier to remove with an operation.

Oncologists monitor how well the treatment is working by placing a clip in the tumour using a long needle, then scan the breast regularly.

The clip acts as a marker for the cancer, so doctors can see it even if the tumour shrinks. The treatment usually lasts five months.

More than half of women have a ‘complete response’ to the treatment, according to research by the Royal Marsden Hospital in London, presented at the San Antonio Breast Cancer Symposium in Texas last year.

This means they may be able to have just the lump removed rather than the whole breast. It also means it may no longer be necessary to remove all the lymph nodes from the armpit — glands close to the breast to which the disease often spreads.

In some cases, the cancer is eradicated by chemotherapy, suggesting surgery — currently used in all early-stage breast cancer patients — may not be needed.

Those with breast cancer who test positive for a protein called human epidermal growth factor receptor 2 (known as HER2-positive breast cancer) and patients with triple-negative disease (breast cancer that does not have receptors for hormones or HER2), which account for around 30 per cent of breast cancers, are most likely to respond well to chemotherapy before surgery, with complete response rates exceeding 60 per cent.

However, all of these patients currently still undergo surgery. This is because mammogram, ultrasound or MRI scans, all used to identify response to chemotherapy, are not very accurate — they can’t differentiate between remaining cancer and dead scar tissue, and doctors don’t want to take the chance of missing residual cancer. 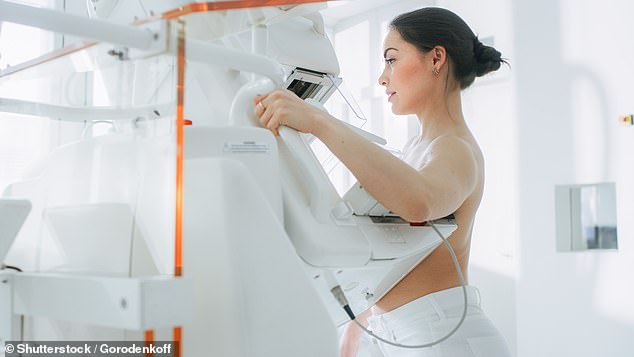 VABs have been used in the NHS for about ten years. In the NHS Breast Screening Programme, they are used to help diagnose whether suspicious small lumps are cancerous and, in some cases, remove them altogether [File photo]

But now, doctors at the Royal Marsden are using a new approach to identify women who have an excellent response to chemotherapy and might not need surgery at all.

It involves using vacuum power to take larger than normal tissue samples from the tumour site. Researchers at the hospital claim these, together with scans, identify with greater accuracy whether any cancer is still remaining.

VAB works in a similar way to a standard biopsy; a needle is inserted in the breast under local anaesthetic and, using ultrasound or mammogram scans for guidance, cells from the suspected or remaining tumour are removed. They are then sent to the lab to check if they are cancerous.

However, with VAB, the needle is bigger than normal and attached to an electronic vacuum, so a larger sample can be suctioned from the breast. This takes about 30 minutes.

Thirteen times more tissue can be removed during a VAB than a regular biopsy, providing more detailed and reliable information about the cells, according to Marios Tasoulis, a consultant oncoplastic breast surgeon at The Royal Marsden, who led the study.

‘With a bigger tissue sample, the results of the VAB are more reliable and, when used in conjunction with scans, this means we can say with greater confidence whether there is any cancer remaining in the breast,’ he says.

‘We hope that, in the future, this could prevent thousands of women whose cancer has been completely eradicated by chemotherapy from undergoing unnecessary lumpectomies or mastectomies.’

VABs have been used in the NHS for about ten years. In the NHS Breast Screening Programme, they are used to help diagnose whether suspicious small lumps are cancerous and, in some cases, remove them altogether.

Research presented at the conference in Texas found that when VAB was used alongside imaging scans, it accurately identified areas of residual cancer and could reliably predict patients who had successfully responded to chemotherapy and had no remaining disease.

The study, carried out in conjunction with the University of Texas MD Anderson Cancer Center in the U.S. and Seoul National University Hospital, South Korea, analysed the results from 166 women who had a biopsy following chemotherapy, of whom 143 had VAB and the rest had the standard type (a core biopsy).

In women with breast tumours that were less than 2cm after treatment, this approach was around 90 per cent accurate, the study found. Full details of the study will be published in a medical journal in the next few months.

Mr Tasoulis says: ‘Our current imaging techniques give us an idea of the extent of cancer that remains following chemotherapy. However, it can be difficult to determine whether an abnormality on the scan is live cancer or residual scar tissue.

‘VAB together with scans appears to be a far more accurate method to establish if and where cancer might remain.

‘What is particularly exciting is the potential for this technique to accurately pinpoint women who have completely responded to chemotherapy with no remaining disease.’

He adds: ‘We are carrying out further research to confirm whether this means those women would not need surgery. I am hopeful that, if the findings are positive, in five to seven years it will mean some women will be able to avoid surgery.

This means less stress, fewer complications and reduced impact on their body shape.’

However, VAB is not without its risks. It can cause discomfort for some women and has a higher risk of haematoma (bleeding which turns into bruising or lumps under the skin) than standard biopsies, due to the bigger sample taken and suction power.

Dr Kotryna Temcinaite, research communications manager at charity Breast Cancer Now, says: ‘Surgery is a cornerstone of breast cancer treatment, but we know it can also have significant emotional and physical effects for patients.

‘For women whose cancers respond extremely well to chemotherapy given before surgery, it may in future be possible for them to avoid surgery altogether, but to do so we need to develop reliable methods to identify these patients and to fully understand the benefits and risks of omitting surgery.

‘This approach is really promising, and might identify people who could be spared surgery because initial chemotherapy has proved so effective. We look forward to seeing further research.’

The health wonders that lie in your larder. This week: Watercress to prevent anaemia.

Gram for gram, watercress has almost as much iron as stewed extra-lean minced beef. It also contains more vitamin C than oranges — a nutrient that boosts the amount of iron your body absorbs.

Iron is critical for the healthy manufacture of red blood cells, and a low level — more common in women than men — can lead to anaemia, which is characterised by poor concentration and debilitating fatigue.

But you need to consume quite a bit — a little watercress on the side is not enough; aim for 80g in a salad or homemade bowl of soup to provide an eighth of the recommended dietary allowance.

This is especially important for vegetarians who can have low levels of iron, which is found in meat and dairy products. 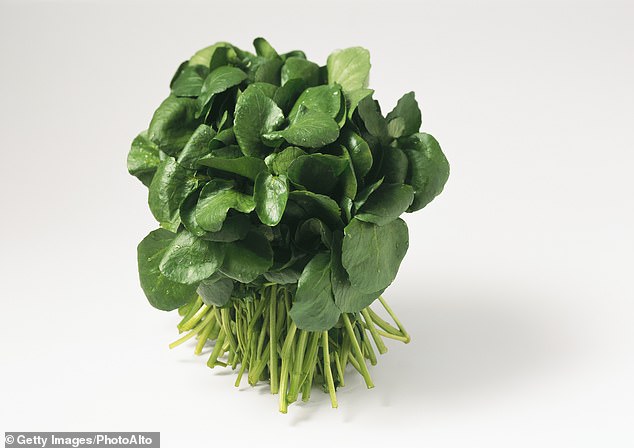 Gram for gram, watercress has almost as much iron as stewed extra-lean minced beef [File photo]

The medical breakthroughs helped by ordinary people. This week: Anatomy. 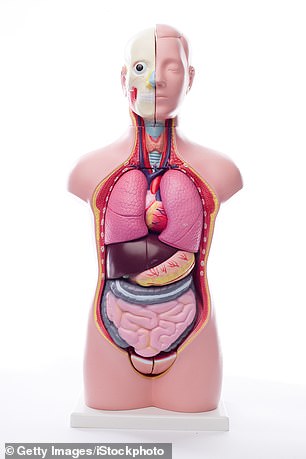 Scientists have created the world’s biggest anatomy quiz to find out how much people know about their bodies — and ultimately improve healthcare.

The interactive, online quiz, designed by a team at Lancaster University and the research platform Zooniverse, asks volunteers to label 25 specific organ types or muscles (without looking them up).

So far, more than 8,500 people have participated.

The scientists found that people cannot pinpoint some vital organs.

Only 15 per cent could correctly label their adrenal glands, which secrete hormones.

The hope is that by identifying the gaps in our knowledge, medical training could be boosted in these areas so that doctors and nurses are better able to explain lesser known conditions to patients.