Napping for too long in the day could make you more likely to get heart disease or die young, according to scientists.

In bad news for siesta lovers, researchers found dozing off for an hour or more each day may increase the risk of dying early or disease by a third.

Afternoon naps may be good for people who don’t get much sleep at night, experts admitted. But the academics, from China‘s Guangzhou Medical University, said they should be kept short, in case kipping in the day is conclusively proven to be bad for health.

The exact reason naps can be dangerous isn’t certain but past research has found they can cause internal swelling called inflammation, which is bad for the heart.

But it could also be that napping is an early sign of health problems for some people, and that they may be sleepy in the day because of looming ill health.

Academics looked at 20 studies of more than 300,000 people, their nap habits and their health and deaths.

Results showed the effect was worse for women, whose risk of dying young rose by 22 per cent if they napped for more than an hour each day.

Science around the effects of napping on people’s health is murky and there have been studies that have linked them to worse heart health but also ones that found dozing off in the daytime could reduce the risk of stroke or heart attack. 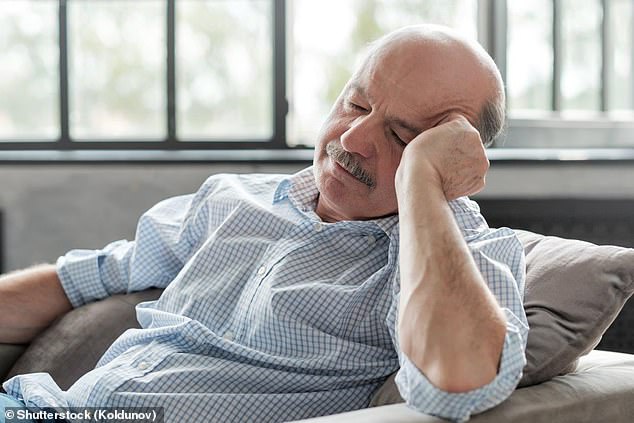 Napping during the day could increase the risk of early death or heart disease for people who sleep for a normal length of time, according to researchers in China who looked at medical records of more than 300,000 people (stock image)

‘Daytime napping is common all over the world and is generally considered a healthy habit,’ said Dr Zhe Pan, an author of the study.

‘A common view is napping improves performance and counteracts the negative consequences of “sleep debt”. Our study challenges these widely held opinions.’

He added: ‘If you want to take a siesta, our study indicates it’s safest to keep it under an hour.

‘For those of us not in the habit of a daytime slumber, there is no convincing evidence to start.’

Dr Pan and colleagues looked at records from 313,651 people in more than 20 past studies, and found that four out of 10 admitted to napping regularly.

People who napped for more than an hour each time, they found, were a third (34 per cent) more likely to develop heart disease, compared to non-nappers.

And the risk of dying prematurely rose by 30 per cent.

Boys who suffer from anxiety or depression in their teenage years are more likely to have a heart attack by the time they reach middle age, a study has found.

Research that followed almost 240,000 men for up to 40 years from the 1950s found that their circumstances when they were 18 or 19 had a strong bearing on their adult life.

All men had joined compulsory military service between 1952 and 1956 – the study was done in Sweden – and did mental health questionnaires at the time.

Follow-up research tracking their health in middle age, up to the age of 58, found that the men who had anxiety or depression when they enlisted (35,000 of them) were more likely to have had a heart attack by the time they reached their late 50s.

This increased risk was found to remain true even when the men’s weight, blood pressure, wealth and general health when they were teenagers were taken into account.

The scientists, at Örebro University, said the men with mental health issues were less likely to stay fit into adulthood and more likely to be unhealthy, abuse alcohol and smoke.

Dr Cecilia Bergh urged parents: ‘Be vigilant and look for signs of stress, depression or anxiety that is beyond the normal teenage angst: seek help if there seems to be a persistent problem.

‘If a healthy lifestyle is encouraged as early as possible in childhood and adolescence it is more likely to persist into adulthood and improve long-term health.’

The research was presented at the European Society of Cardiology Congress.

If people slept for less than six hours a night, however, afternoon naps did not increase the risk of death or disease.

Other studies have linked insufficient sleep to other serious health problems, though, and adults are generally recommended to get at least seven hours per night.

Dr Pan suggested that napping might actually be good for people who don’t get enough sleep at night.

‘The results suggest that shorter naps – especially those less than 30 to 45 minutes – might improve heart health in people who sleep insufficiently at night,’ he said.

But for those who were getting a lot of sleep, any length of kip the next day was found to increase the risk of going to an early grave by 19 per cent.

This effect was worse for women, whose risk rose by 22 per cent.

Scientists have been looking at the health effects of napping for years and studies have produced conflicting results.

Professor Jeremy Pearson, associate medical director at the British Heart Foundation, was not involved with the research but said: ‘Whether sneaking in a daytime nap is good or bad for your heart has been under debate for some time.

‘Although this study suggests that daily naps of more than 60 minutes increase the risk of heart and circulatory diseases, more research is needed to understand why.

‘Rather than focusing on one factor, it’s important to consider a range of lifestyle choices to keep your heart and blood vessels healthy. Doing 150 minutes of moderate exercise a week and eating a healthy Mediterranean-based diet can reduce your risk of having a heart attack or stroke.

‘Taking medication to treat high blood pressure and managing your cholesterol can also reduce your risk of life-threatening heart and circulatory diseases.’

One paper published in March this year found similar effects to those uncovered by Dr Pan and the Guangzhou researchers.

A team at Stanford University in California found that older people who napped regularly were two-and-a-half times more likely to be diagnosed with heart disease or cancer.

The study of 11,000 people said that day-time sleepiness after a normal amount of sleep at night was associated with serious illnesses including high blood pressure and diabetes.

Dr Pan’s study also noted this, and suggested that inflammation – a type of harmful swelling inside the blood vessels and soft tissues – could be the culprit.

Inflammation, which can be triggered by tiredness and exhaustion, puts extra strain on the body and the immune system and can cause permanent damage if it lasts for a long time.

Some studies, however, have found daytime naps to be beneficial.

Research published by the University Hospital of Lausanne in Switzerland last year, linked napping twice a week to a lower risk of stroke or heart attack.

Scientists found people who took a daytime nap once or twice a week were almost 50 per cent less at risk compared with those who never snoozed during the day.

But napping any more than twice a week had no further benefits on heart health, the study found.

The team monitored 3,400 people aged 35 to 75 for an average of five years and saw 155 heart attacks or strokes. Napping once to twice weekly was associated with an almost halving the risk (48 per cent) compared with those who didn’t nap at all.

That study was published in Heart, a journal published by the British Medical Journal.

Dr Pan and his colleagues presented their research – named ‘The association between napping and the risk of cardiovascular disease and all-cause mortality: a systematic review and dose-response meta-analysis’ – at the European Society of Cardiology Congress this week.

Another study presented at the European Society of Cardiology Congress revealed that getting suspected heart attack patients to spit into a tube could help diagnose them six times faster than blood tests currently used.

Scientists have managed to process saliva in a way that allows standard testing kits to pick up on tell-tale signs of the deadly event in just 10 minutes.

In contrast, blood tests that look for the same chemical — called troponin — take at least an hour to achieve the same result.

Researchers in Israel said the first trials of the method showed it was 84 per cent as accurate as the commonly-used blood test.

Troponin is a protein that helps to regulate the heart’s function and is dumped into the bloodstream when someone’s heart is damaged during a heart attack.

Finding it in the blood is how doctors can tell for certain if the crippling chest pain is actually down to a heart attack.

Heart attacks lead to more than 100,000 hospital visits every year in the UK and there are more than 1.4million living survivors.

They happen when the blood supply to part of the heart is cut off and a bit of the muscle is starved of oxygen, which can kill or permanently damage it.

The heart does not generally stop completely when someone suffers an attack — that is called a cardiac arrest, which is much deadlier.

To test whether someone has had a heart attack, doctors test their blood to look for the protein troponin.

The current test to find troponin can take more than an hour, so scientists at the Soroka University Medical Centre in Be’er Shiva, Israel, wanted to find a faster way.

They found the saliva test accurately diagnosed 84 per cent of 32 people (27) who had been diagnosed through the gold standard blood test.

And the best thing about the saliva test was that it only took 10 minutes to produce the result, which was at least six times faster than the blood test.

The same testing kit that is used for blood could be used on the saliva, they found, as long as the spit sample had been processed first to remove other proteins that could confuse the test.