Most people won’t get the flu jab until December despite a Government drive to get everyone vaccinated to protect the NHS this winter.

This year officials are organising the biggest ever flu vaccination programme for the UK, pledging to reach 30million people including everyone over the age of 50 and 11-year-olds.

The plan was to cover more of the at-risk groups so that fewer people get seriously ill with the seasonal flu, which will relieve pressure on hospitals that are in danger of facing a resurgence of Covid-19 cases this winter.

But leaked documents, seen by The Telegraph, reveal services aim to ‘extend the vaccine programme in November and December to include the 50-64 year old age group’.

It is recommended to get the flu jab in the autumn before flu starts circulating, therefore millions could be at risk of catching it before they can get vaccinated.

The documents say healthy patients aged 50 to 64 may not receive the jab at all, despite Health Secretary Matt Hancock boasting that the UK had ‘the biggest flu jab programme ever this autumn’.

The vaccinations ‘might’ be offered ‘following prioritisation of other eligible groups and subject to vaccine supply’.

Last year 15million people in England were vaccinated, but this was less than half of eligible people. It suggests if everyone in these groups took up their free jab this year, there would not be enough for additional people. 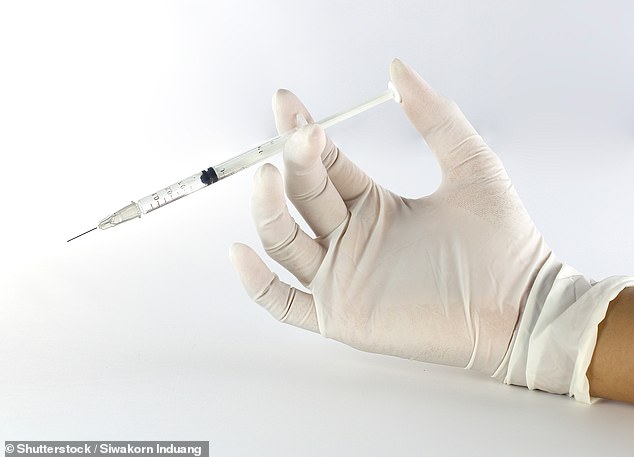 Most people won’t get the flu jab until December despite the Government drive to get everyone vaccinated to protect the NHS this winter, it’s been revealed (stock)

Increased flu vaccinations are planned to help reduce pressure on the NHS this winter by preventing flu-sickness which can cause hospitalisation and even death.

Thousands of people end up in hospital every year because of bad cases of flu, which can progress to pneumonia and kill people who already have weak immune systems.

As well as over 65s, those aged between 50 and 64 were set to be included, and the Department of Health initially said they would ‘be invited later in the season’.

It has now been revealed this could be as late as Christmas, when flu season starts.

WHO IS ALREADY ELIGIBLE FOR A FREE FLU VACCINE?

In 2020/21, the current year, groups eligible for the NHS-funded flu vaccination programme include the same groups as last year:

But because of the coronavirus epidemic, the Government is expanding eligibility for the free vaccine in a bid to reduce the number of people who get infected with flu and relieve pressure on NHS hospitals.

This is set to include:

The NHS website says ‘it’s more effective to get the vaccine before the start of the flu season (December to March)’ because it gives the body enough time to build immunity to the virus before they catch it during the cold months.

Those aged 50-64 with underlying conditions, which put them at risk of serious illness if they catch a virus, are among those who will not get a vaccine till the end of this year.

One diabetes patients, aged 63 – just on the cusp of receiving a free NHS flu vaccine in the previous programme – fears a jab in December is too late.

She said her GP practice in North London had text her to say ‘due to availability of vaccines’, those in the 50-64 age group would unlikely to get a vaccine until December.

The patient, who was not named by The Telegraph, said: ‘Because I have an underlying condition which makes me vulnerable to Covid and I fall in the new plus-50 age category I thought I was eligible for a flu vaccination on two grounds. I was pretty surprised to receive a text message from my practice.’

A spokesperson for the DHSC confirmed diabetics are an ‘at risk’ group so should be prioritised by GPs ahead of 50-64 year olds.

Dr Jonathan Leach, Honorary Secretary for the Royal College of GPs, said it was essential that those in the highest risk groups received their vaccinations.

He urged the Government to provide assurances about whether there are sufficient vaccines to provide an expanded programme as suggested.

‘If there is not enough supply, GPs, our teams and the public need to know, so that patients’ expectations can be managed – and we need clear guidance as to who we should prioritise for a flu jab, outside of those patients most at risk,’ he said.

Health Secretary Matt Hancock has boasted officials ‘have bought more flu vaccine than ever before’.

But the Royal College of GPs have highlighted two issues with the programme expansion; getting enough doses and the logistics of administering them.

Mr Hancock said on BBC Breakfast that the ‘law has been changed’ so that more people can administer vaccines, saying: ‘We want pharmacists, nurses and GPs to be able to administer the jab.’

He was met with fierce backlash from the NHS who said he was ‘poorly informed’ for suggesting those healthcare workers do not already administer jabs.

The Royal College of Nursing General Practice Nursing Forum tweeted: ‘Year in, year out for decades nurses in General Practice have delivered the bulk of the flu vaccinations to the population of the U.K. It is therefore concerning that Matt Hancock is apparently unaware that #Nursing has delivered the #flucampaign for so long,

‘As the Health Secretary is so poorly informed, we are offering him the opportunity to meet with general practice nurses to discuss the actual scope of our work.’

NHS Million, an account run by NHS staff, tweeted: ‘This is your Health Secretary claiming he’s changing the law to allow nurses and pharmacists to administer flu jabs But the truth is both roles have been doing exactly that for years and years Please RT if you think he should’ve known that already.

‘This is not a “gotcha” moment where we take pleasure in catching Matt Hancock out for being incompetent. We are genuinely frightened that he knows so little about how the NHS actually works at a time when vaccinations are so imperative.’

Ministers are also said to be considering a strategy to get people vaccinated at drive-throughs – like Covid-19 testing facilities.

HOW MANY PEOPLE GET THE FLU JAB?

NHS England is planning to make vaccination centres which are modelled on the drive-through Covid-19 testing areas, which could pop up in GP surgery car parks.

The chief medical officer for England, Chris Whitty, wrote a letter to GPs and other NHS bosses which said they should look at ‘social-distancing innovations, such as drive-in vaccinations and ”car as waiting room” models’, The Times reported this month.

The drive for the expanded vaccine programme to work will rely on people agreeing to have it, and previous uptake figures suggest this may be a difficult task.

The flu jab is the best protection against influenza, but statistics show the number of vulnerable people getting free flu jabs in England is at an eight-year low.

Last winter just 45 per cent of people under 65 with serious health conditions, who are offered the vaccine for free on the NHS, received the jab.

This has tumbled from a peak of 52.3 per cent in the winter of 2013 and is the worst uptake since Public Health England’s records began in 2012.

The World Health Organisation has previously said that countries should aim to vaccinate 75 per cent of their vulnerable population.

It raises fears of an outbreak of flu along with a second wave of coronavirus will cripple the NHS and cause chaos figuring out which patients have flu and which have Covid-19, as the symptoms are similar.

Last year, the flu programme was expanded to include all primary school aged children for the first time. This year this children in year 7 shall be included and will get their jab from health teams visiting secondary schools, DHSC said.

All frontline health and social care workers will also be urged to get their free vaccine.

A Department of Health and Social Care spokesperson said: ‘We have outlined in our flu vaccine plans that those eligible under at risk groups – including diabetes – are to receive a flu vaccine as a priority, and we have secured additional flu vaccines for those who need them.

‘This is the biggest flu vaccine programme in UK history and healthcare staff will work to vaccinate more than 30 million people, millions more than received it last year. Additional guidance will be provided to GPs and pharmacists on how to access them in September.’