For the second time in three races, Lewis Hamilton is doing what his rivals cannot and is beating himself.

Two time penalties – each of five seconds – gave him too much to do against team-mate Valtteri Bottas and he was unable to equal Michael Schumacher’s record of 91 Grand Prix wins.

But with fans back at Sochi there was more than just Hamilton’s errors that caught the eye with Bottas’ sweary radio rant, Carlos Sainz’s September struggles and Charles Leclerc learning to be ‘happy’ again in a Ferrari among the storylines.

Sportsmail picks out seven of the best from Sunday’s race… 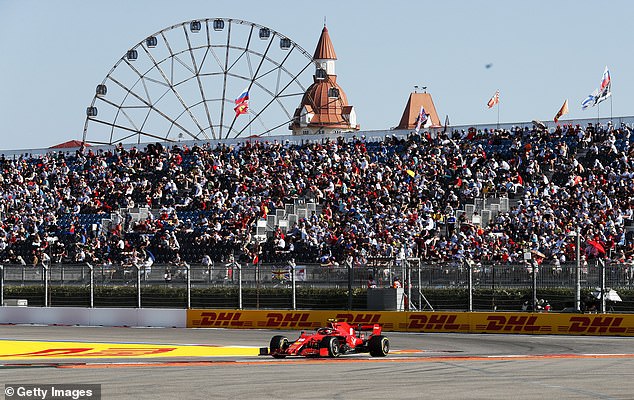 Stupid errors are all that can stop Hamilton

When everyone goes according to plan, Lewis Hamilton wins every race.

Rivals have no answer and his team-mate is clearly a tier down from him when it comes to raw talent in the same machinery.

Max Verstappen is immensely talented but knows he simply doesn’t have the pace for a rat-race against Hamilton every week. And so, Hamilton’s biggest obstacle to victory? Himself. 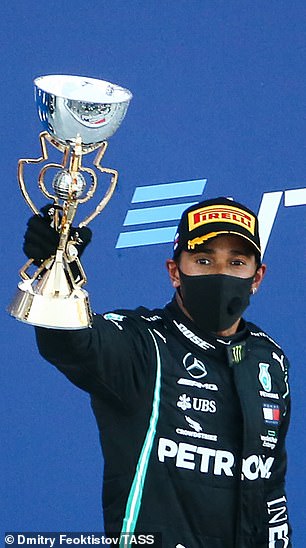 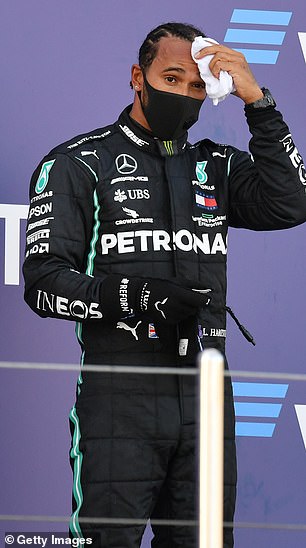 For the second time in three races Hamilton has been left to bemoan penalties. He was in control in Monza before being penalised for entering the pit-lane when it was closed.

If Mercedes were ready to take the wrap for that one, it was Hamilton who had to shoulder the responsibility in Russia for two illegal practice starts outside of the designated area.

The race began with the six-time champion under investigation and two five-second penalties followed. He rallied back to third but was left with a bitter taste of ‘bulls***’ in his mouth afterwards.

‘I’m pretty sure nobody has got two five second penalties for something so ridiculous before,’ he said afterwards. ‘I wouldn’t put anyone in danger. I’ve done this at a million tracks over the years and never been questioned on it, but it is what it is. 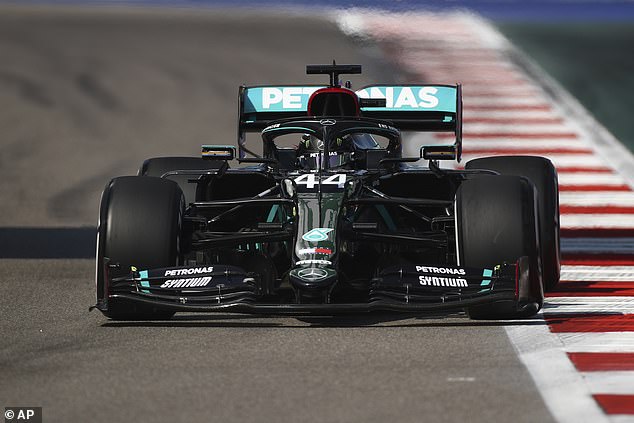 ‘They (FIA) are trying to stop me aren’t they? But it’s okay I just need to keep my head down and stay focused and we will see what happens.’

But, whether he thinks they are wrong or not, Hamilton did contravene the rules and it was another cheap error from Mercedes to deprive him another race victory.

If rivals cannot get near him the last thing Hamilton can do is do their job for them by beating himself. With the Eifel Grand Prix in Germany next, the Brit needs to prove a pattern is not developing here.

‘To whom it may concern, f*** you,’ Bottas mused over the team radio after winning the Russian Grand Prix.

As the man in Hamilton’s shadow, accepting a peripheral role with the odd victory may as well come on the job description.

Bottas rarely rocks the boat but after a week where he personally responding to criticisms on Instagram, he had quite simply had enough of being told he’s not good enough to drive for Mercedes and he wanted the world to know.

The Finn gets hammered for failing to mirror the success of Hamilton in the same machinery and while his win was fortuitous – Hamilton almost certainly would have won without the penalties – he had earned a weekend to be smug.

Now you have to back it up, Valtteri. 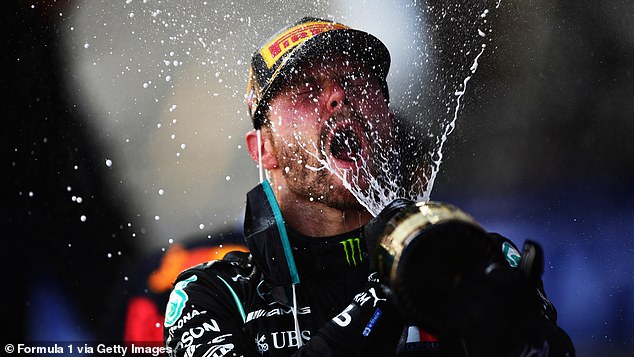 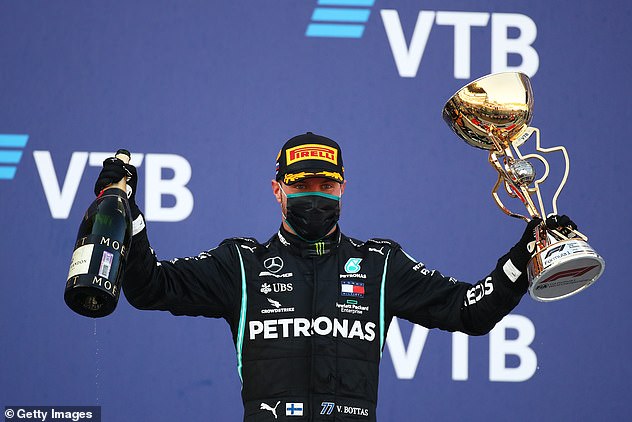 Losing Nico Hulkenberg was one thing, but losing a talent like Sergio Perez would be another.

Racing Point have announced he will not continue with the team next season, instead sticking with Lance Stroll, the son of billionaire owner Lawrence Stroll.

That in itself was no surprise to race fans but with seats quickly filling for 2021, it is not yet clear where – or even if – there is a landing spot for the Mexican.

Finishing fourth, the best of the rest outside the podium, and team-mate Stroll suffering a second successive DNF, Perez is more than proving his worth to be on the grid next season. 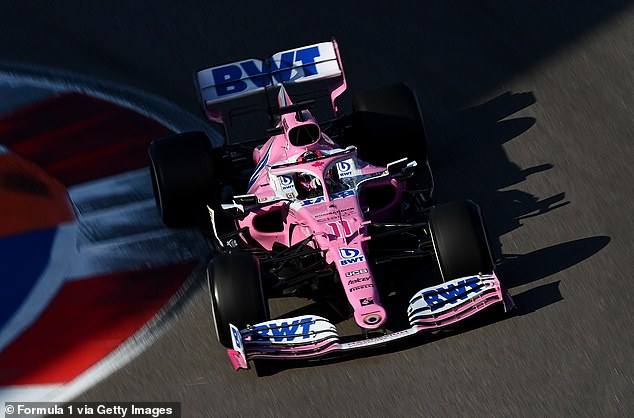 Speaking to Marca he teased interest in Red Bull, with doubts remaining over young upstart Alex Albon, and took a shot at Racing Point in the process.

‘I need a project that motivates and convinces me, that makes me get up every morning, train and travel all over the world,’ he said.

‘And the opportunities I have now don’t do that at all.’

Losing Perez for 2021 would be a travesty for racing,  it really would.

This season has one of the best midfield battles in years

While Hamilton is expected to run away with the championship, with Verstappen and Bottas jockeying for second and third, those below feel anything is possible and it is thoroughly entertaining.

Ferrari’s collapse has helped, as has Albon’s struggles in the second Red Bull, but now teams go into a race weekend with Stroll, Perez, Daniel Ricciardo, Esteban Ocon, Lando Norris, Carlos Sainz, Daniil Kyvat, Charles Leclerc and Pierre Gasly all of the belief they can be the Best of the Rest outside the podium.

It makes for great drama and ensures even a Hamilton procession out front cannot spoil the race in its entirety. 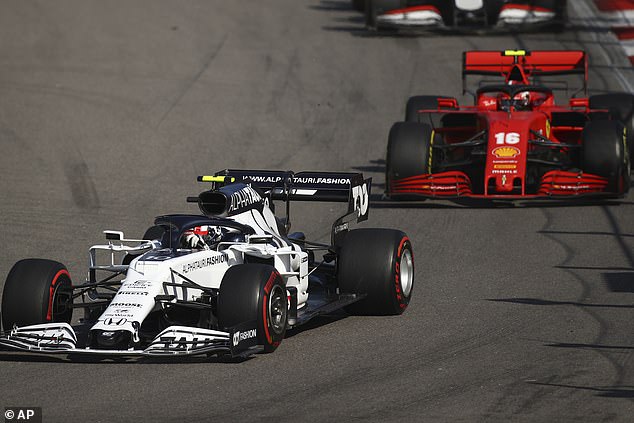 Week-to-week the constructors and drivers within this ever-expanding group shift around.

A gearbox penalty here, a race win the next, a DNF thereafter, it represents one of the best midfield battles fans have been treated to in years.

The big sub-plot here is that many of these drivers are moving around for the 2021 season.

Perez is out the door at Racing Point, Ricciardo is off to McLaren, Sainz is going to Ferrari and there is still question marks on Albon’s future at Red Bull.

With age on the side of a lot of these drivers, this could be a battle that will run and run for years to come. 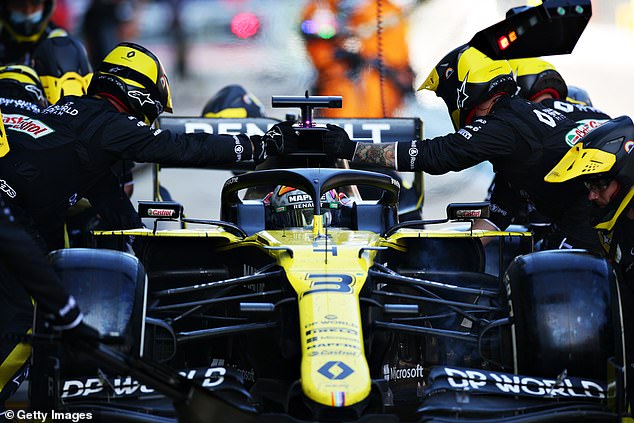 Sainz needs to cut out mistakes to make it at Ferrari

Ferrari may be a basket case right now but they simply will not tolerate the kind of mistake that Sainz produced in Sochi.

His ‘misjudgement’ as he called it saw him collide nastily into the barrier on the opening lap, ending his involvement.

Sainz qualified in P6 and while trying to maintain his position in a crowded field going into Turn 2, he ran wide before turning too late to make it back on track, hammering his front wing into the barriers.

He apologised immediately to his team. He knew it was his mistake and held his hands up which, while admirable, will not have been viewed well by those at Ferrari. 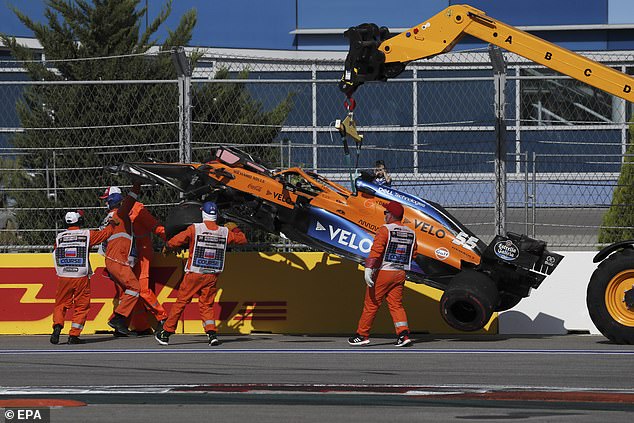 ‘I didn’t have a very good start, the dirty side of the grid was terrible – we were all slow off the line,’ Sainz said.

‘So a misjudgement by my side, a mistake, but I still think that corner shouldn’t exist. It’s not a nice corner to drive around and it generates these kind of these situations.’

Sainz’s team-mate next year is Leclerc and it is damning that a P6 finish could bring happiness to a team that used to measure success with championship or bust.

But the Prancing Horse needs to learn to walk again before it can walk and this was an encouraging weekend.

It marked the team’s best result in the last five races and that in itself is both damning, but also extremely positive going on to Germany.

‘Very happy about today,’ he said on Sunday. ‘Again, from beginning of the season it’s difficult to be happy with P6, but it’s the way it is. We maximised what we had today.

‘Yesterday I was frustrated about quali, but at the end I don’t think we could have done better, even with a better quali.

‘So happy with the weekend, now we need to understand what we did different to be so much better in the race than Mugello, for example, but it’s a good step forward.’ 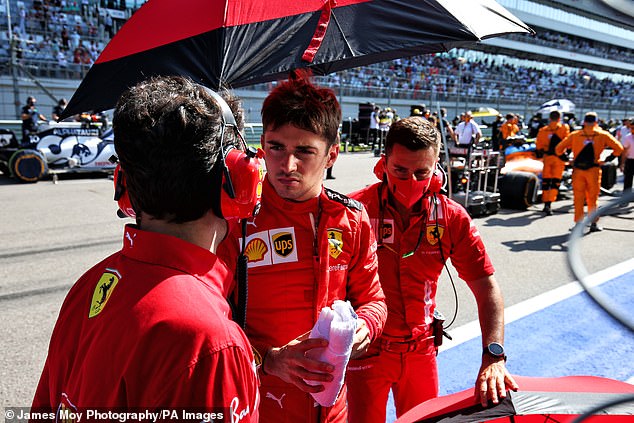 Seeing fans back at sporting events is starting to bring with it a sense of nostalgia, a nod to life pre-pandemic where supporter attendance was taken very much for granted.

There were 20,000 in place in Sochi on Sunday to see Bottas take the crown and despite a season of woe there were a number proudly displaying the red and yellow colours of Ferrari.

While there were a smattering of fans at the Tuscan Grand Prix recently, this was a much larger enterprise and F1 will hope the coming weeks see similar numbers pass without incidence should they be allowed to build on what unfolded in Russia.

The sport, like many others, was gripped by the throat by Covid-19 but Sochi proved there is a way to make it the spectacle of old again. 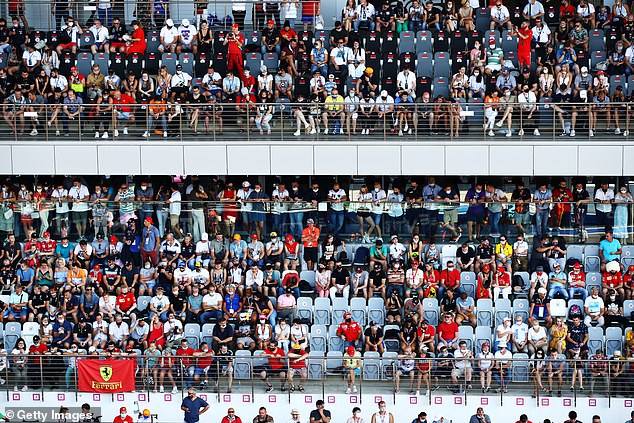 There were 20,000 fans in attendance to witness the Russian Grand Prix in Sochi on Sunday