By Jonathan Mcevoy For Mailonine

Lewis Hamilton’s quest to match Michael Schumacher’s 91 race wins was wrecked by a 10-second penalty in the Russian Grand Prix.

The world champion, who started on pole, was stymied before the race began, when he staged two practice starts on an ‘undesignated’ area, by the pit lane exit.

With the race only a few laps old, the stewards imposed a five-second penalty for each of the infringements. 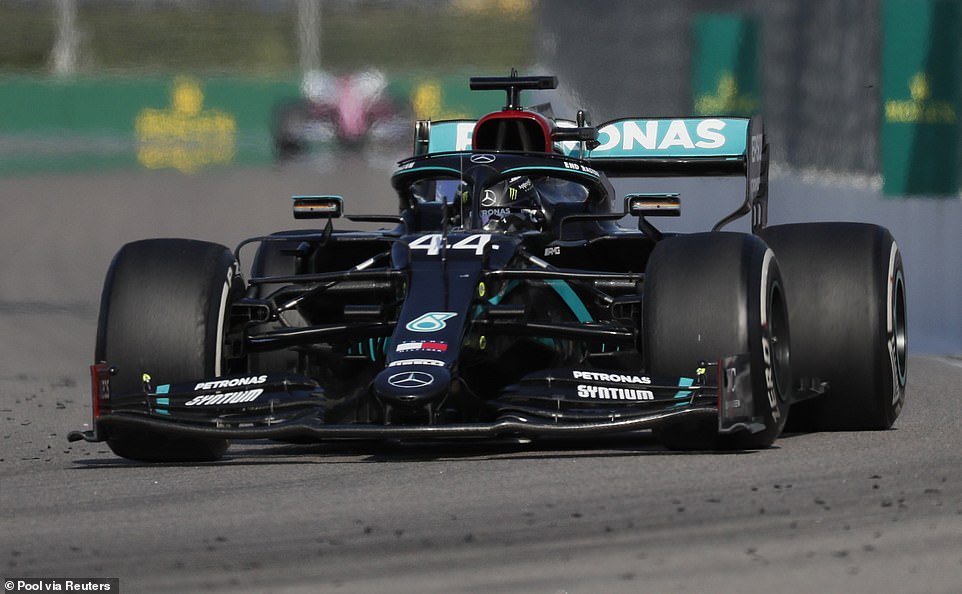 Hamilton was furious, calling the decision ‘bull****’ and asking: ‘Where’s that in the rulebook?’

It appeared a tough call, of course, and silly and bossy, but it was unavoidable given the rules as they are written.

The stewards watched video evidence before reaching their verdict.

The punishment denied the Briton probable victory – with Valtteri Bottas, his Mercedes team-mate, registering his second win of the season. Max Verstappen, of Red Bull, was second, and Hamilton third.

It was an anti-climactic end to a weekend where all the excitement had centred on Schumacher’s landmark 91 wins. It was also harsh on Hamilton, for he had asked his pit wall experts if he was OK to do the practice starts where he did. He was told yes by race engineer Peter Bonnington.

Later, when news of the punishment was broken to Hamilton, he was furious, asking: ‘What happened?’

Mercedes brought him in, earlier than he wanted, after 16 of 53 laps, for new tyres and he served his time in hokey there and then. ‘This is just ridiculous, man,’ he said as he sat it out.

He emerged in 11th place, more than half a minute back from Bottas, his chances of victory well and truly over.

He moaned about his lot. ‘Why did you stop me so early?’ he asked. ‘I’ll have to manage (my tyres). I’ll struggle to make it to the end.’

And told of Verstappen’s latest time, he snapped: ‘I don’t want any more info, Bono. It doesn’t make any difference.’

He at least escaped with just one penalty point on his licence for each illegal start, taking him to 10 in the calendar year. Two for each would have taken him to 12 and a one-race ban.

He now has to watch his Ps and Qs in the next four races – Germany, Imola, Portugal, Turkey – before his first points are wiped.

Prior to the kerfuffle, Hamilton had driven well. Passed briefly by Bottas using the drag into the second corner of the race, he then reclaimed the lead on the outside of the next bend.

A safety car came out after McLaren’s Carlos Sainz and Racing Point’s Lance Stroll crashed on the opening lap. Hamilton managed the restart well, maintaining the lead that in the end counted for little.

Lewis Hamilton will start on pole as he aims to draw level with Michael Schumacher’s 91 career wins at the Russian Grand Prix.

In a dramatic qualifying session on Saturday, Hamilton once again set the fastest time as Max Verstappen pipped Valtteri Bottas to second.

Sportsmail will provide live Formula One coverage from Sochi as Hamilton homes in on another record.