Nearly every man is born with one but it doesn’t come with a user manual. And there are so many myths out there about the male sex organ that useful knowledge often doesn’t get through.

All these myths burden men with frustrations — and over the 25 years I have worked in urology, sadly I have met too many men, young and old, whose quality of life was completely diminished because of their perceived ‘abnormalities’.

So let me set the record straight… 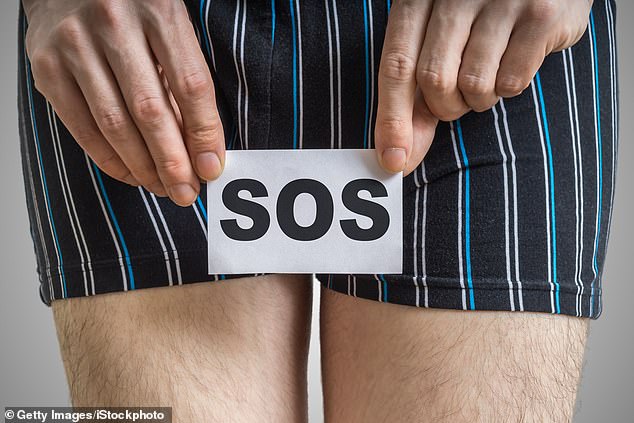 In medicine, we use the ‘stretched penile length’ or SPL to measure the length (where we hold the penis and extend it firmly) [File photo]

The truth about what is ‘normal’

Most people have no idea there is a muscle around the penis because you can only see it under a microscope.

The dartos muscle helps with regulating the temperature of the testicles: when they get too cold, this muscle contracts the skin of the scrotum to help tuck the testicles back in —– it’s why the penis looks small when you swim in cold water.

A man with an active dartos muscle will appear to have a smaller penis — so when men compare, as many do, then all too quickly come to the conclusion ‘Oh no, mine is too small’, it could be they just have a more active dartos.

In medicine, we use the ‘stretched penile length’ or SPL to measure the length (where we hold the penis and extend it firmly).

Anything up to 1.5cm above or below these figures is normal. Men outside this range have unusual lengths but their penis is not abnormal.

The study also highlighted a few correlations between length and other physical characteristics.

The taller the man, the greater the chance of him having a long penis — although this is a ‘weak’ correlation, meaning there is a greater chance of this being true but it’s not a hard-and-fast rule.

There is no relation with the size of the feet, nose or ears.

Another weak link is age. As men age, they lose muscle strength and elasticity, including of the dartos muscle, which draws the genitalia closer towards the body.

The longer gravity does its work, the less resistance the dartos muscle provides and the lower the penis and scrotum hang.

Being obese can make you smaller

You can also ‘bury’ your penis with an unhealthy lifestyle. Obesity is one of the major causes of penises looking smaller, as a result of the increased fat tissue at the base of the penis.

Losing 10kg (1st 8lb) or so will give the penis an extra centimetre in length. 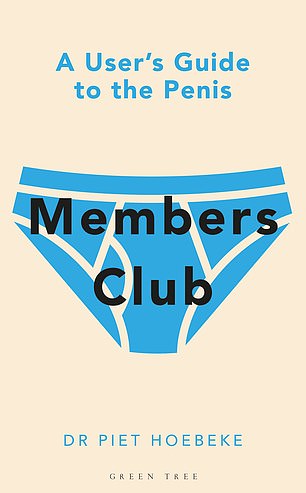 Members Club: A User’s Guide To The Penis, by Piet Hoebeke is a manual for men who want to understand their bodies better

This is not the only good reason to lose excess weight. Obesity is inversely proportional to penis health: in plain terms, the fatter you are, the more problems you’ll have with your penis, such as erectile dysfunction (obesity is linked to heart disease and type 2 diabetes, which in turn affect blood supply and the nerves, so sensory stimuli don’t get through).

Your penis can become shorter following surgery. Men who have had their prostate completely removed for cancer end up with a smaller penis.

The prostate gland surrounds the urethra (the drainage tube from the bladder).

When the prostate is removed, the urethra becomes five centimetres shorter and the penis loses some of its length, too.

But are we all getting shorter?

Some experts think penises are getting shorter worldwide. One cause may be the hormone disruptors that are increasingly appearing in the environment. These not only reduce fertility but also impede penis growth.

That reduced penis length has so far been observed mainly in alligators in Florida shouldn’t stop us taking it seriously. If alligators are susceptible to hormone disruptors, there is no reason to think humans are immune. 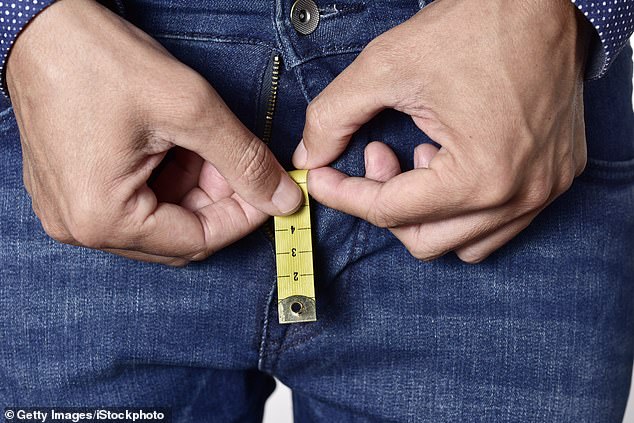 The downside of length

Men who really want a longer penis almost always believe an oversized penis is a godsend.

But quite apart from it not being necessary for conception or a woman’s sexual pleasure (research shows penis length comes second to width), the risk of injury also increases with length. That is a question of physics.

With a long penis, the forces exerted on the load arm are greater, resulting in greater likelihood of a penile ‘fracture’, where the tube of solid tissue around the erectile tissue can tear.

Such a tear doesn’t go unnoticed. You hear a crunching noise and feel a sharp pain. It quickly swells up and turns purplish-blue. (My tip: the missionary position is the safest.)

Healthy men get an erection six to eight times a night and usually don’t even notice.

This is important because if a man only gets an erection when he needs one for sex, the mechanism may fail just when it is needed.

Night-time erections reflect circulatory health. If you no longer get them, it’s time to see a cardiologist.

To check, we used to ask a man to secure a strip of postage stamps around his penis before going to sleep.

If the strip was broken in the morning, he’d had a night-time erection.

Night erections also maintain penis length — think of it as a form of stretching. In impotent men, the penis may shorten.

No gent needs a ‘manhood stretcher’

It is astonishing what instruments of torture are offered to men on the internet!

One is the ‘penis stretcher’, a double clamp to stretch your penis. The sales pitch claims that the permanent tension encourages your cells to divide, creating more tissue mass. Nonsense.

What the device does is wear out the dartos muscle, so your penis looks a bit longer at rest. Quite apart from the discomfort wearers report, the truth is that as soon as you stop wearing it, your penis will go back to its previous length.

A penis stretcher can cost more than £170 and you are definitely being swindled.

Why men should sit to go to the loo

The shape and length of the penis make urinating while standing so easy, we don’t think about it. But we weren’t actually built for that — it wasn’t evolution’s intention.

You only realise this when you look at the internal plumbing of the male. Urinating while standing is an invention of modern man, in an environment where he doesn’t feel threatened.

Prehistoric humans would be bemused to see a man standing up, urinating against a tree.

Your penis might be protected from prying eyes, but you are not protected from enemies or predators. In a squatting position, with your back to the tree and closer to the ground, you are better hidden.

Our close relatives, such as the chimpanzee and bonobo, still squat when they urinate and that is also the natural position for us.

When you squat, your urethra hangs down in one straight line and all the urine is emptied.

Standing to urinate creates a sort of siphon — urine can stay inside the urethra, then flow out after you have finished, for example when you sit on a chair. Even adult males are better off sitting down to urinate.

Swing low on the left

Both testicles do exactly the same thing but the left one hangs a bit lower. In the Renaissance period, artists were already reflecting this in their sculptures.

What we see on the outside reflects asymmetry on the inside. The testicles are connected to blood vessels via veins and arteries, but the veins that take the blood back to the heart each have a different purpose.

The vein of the right testicle connects to the inferior vena cava (the large vein that carries deoxygenated blood back to the heart); the left testicular vein goes straight to the kidney, which is a lot higher up in the body. The blood needs to climb quite a way and to stop it flowing back, this vein has valves.

During puberty, boys have a growth spurt and their torso grows as well. This means the left testicular vein has to cover a longer distance within a short space of time, which can cause the valves to work less well (and this causes the testicle to hang lower).

Many people have probably never thought about it but the asymmetrical position of the testicles explains why most men’s penises hang to the left in their underwear. There is a bit more room there.

Warning: Cyclists are at risk

If the height of your bike saddle isn’t adjusted properly, this can exert pressure on your erectile tissue and nerves as they pass under the pubic bone.

Long-term, this can cause damage.

How do you know if this is happening? Just as your arm can ‘fall asleep’ if you lie in the wrong position in bed, so your penis can fall asleep, too, becoming numb.

If this happens, lower your saddle.

Also, the tip of the saddle shouldn’t be pointing up too much — if anything, it’s better for it to point down slightly. 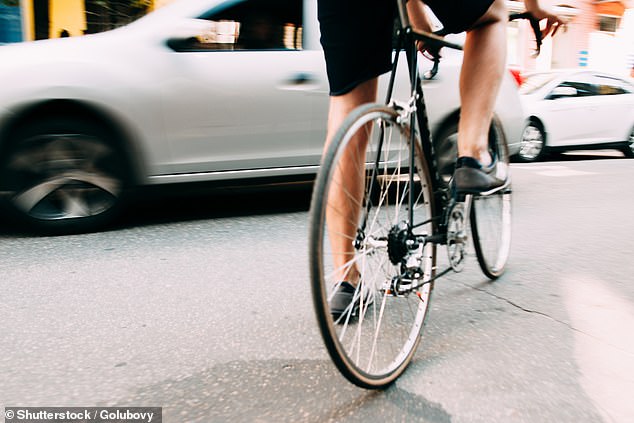 If the height of your bike saddle isn’t adjusted properly, this can exert pressure on your erectile tissue and nerves as they pass under the pubic bone [File photo]

Have more sex to prevent cancer

Most men only become aware of their prostate when something is wrong. Cancer is probably the first thing that comes to mind, but there is also a condition called benign prostatic hyperplasia, a non-cancerous enlargement of the prostate, where the tissue swells up and compresses the urethra.

Can you prevent prostate problems? Of course. It’s good for the prostate to ejaculate regularly. As a urologist, I can recommend this to everyone.

A study involving 32,000 men showed that those who ejaculate more than 21 times a month between the ages of 20 and 40 have a 20 per cent lower chance of getting prostate cancer. The figures show a paradox, as we know testosterone promotes prostate cancer; the higher your testosterone level, the higher the risk.

Now, you would have thought that men who manage to ejaculate more than 21 times a month have a high sex drive and therefore a high testosterone level, but it appears that the frequent ejaculations neutralise the harmful effect of testosterone on the prostate.

Don’t panic, this is normal

Men sometimes get into a panic about their penis even though there is actually nothing wrong with it. So what is normal?

Daily hygiene can prevent a whole load of bother. You don’t need special soap for washing, so long as it’s skin-friendly and pH-neutral. Even more important than washing is rinsing your penis well, to make sure no soap residue is left behind.

The second step may surprise you: watch what you eat.

Normally, when people change their eating habits they are concerned about their weight or trying to avoid diabetes.

They never think of their penis as a reason to eat a more balanced diet, moving away from the classic Western fare of red meat, saturated fat and sugar.

Men who smoke, drink too much alcohol and eat unhealthily find their penis is the first thing to take a hit. For example, they can’t get an erection any more or their libido is depleted.

Funnily enough, they often believe something is wrong only with their penis, as though it were disconnected from the rest of their body.

It’s their general health that is suffering and their failing phallus is just one symptom of a bigger problem.

Extracted from Members Club: A User’s Guide To The Penis, by Piet Hoebeke, published by Green Tree on Thursday, £14.99. © Piet Hoebeke 2020.