Getting the flu jab while pregnant doesn’t increase the baby’s risk of being diagnosed with autism later on, another study has found.

Researchers in Sweden compared autism diagnoses among seven-year-old children whose mothers had a swine flu vaccine during pregnancy and those whose did not.

Rates of autism were no different compared with children whose mothers did not get vaccinated, confirming there is no link.

Child health is a touchy subject for people who are against vaccines, and the Swedish researchers said people have claimed in the past that there may be a link between the H1N1 jab and autism.

Uptake of the flu jab during pregnancy is moderate at best, experts say, and one reason mothers-to-be are put off may be due to safety concerns.

Scientists do not know what causes autism but they have repeatedly stressed it is not related to vaccines and evidence continues to prove this.

Pregnant women are encouraged to get the flu jab every year – they can get it free on the NHS in Britain – because they are at higher risk of complications from the common virus. 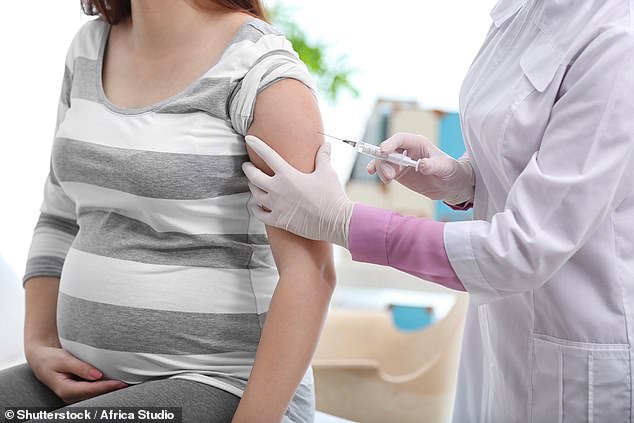 Getting the flu jab while pregnant doesn’t increase the child’s risk of being diagnosed with autism later on, another study has found (stock image)

Pregnant women are considered to be at high risk for serious illness if they catch the flu and their babies may be born prematurely.

Studies have shown that it’s safe to have the flu vaccine during any stage of pregnancy, from the first few weeks up to your expected due date, the NHS says.

Furthermore, a number of studies show the jab gives the baby immunity in their first few months.

But despite this, many still refuse to take the crucial jab – which is free on the NHS.

During the most recent flu season, between September 2018 and February 2020, flu vaccination uptake decreased in England.

The aim is to get 75 per cent of pregnant women vaccinated against flu this winter, amid concerns an outbreak will coincide with another Covid-19 wave.

The Centre for Disease Control and Prevention in the US also encourages women to get a flu jab during pregnancy saying millions of women have safely done so throughout history.

This flu season, vaccines will contain a strain nicknamed ‘A/Brisbane/02/2018’ which is similar to H1N1 – better known as ‘swine flu’.

The 2009 swine flu pandemic lasted for about 19 months and was the second of two pandemics involving H1N1 influenza virus – the first being the 1918–1920 Spanish flu pandemic.

She said in November: ‘Over 30 years, we have vaccinated millions of children. It is a safe vaccination, we know that, and we’ve saved millions of lives across the world.

‘People who spread these myths, when children die they will not be there to pick up the pieces or the blame.’

One myth is based on research done by Andrew Wakefield in the 1990s which claimed MMR led to autism, but his results were later found to be fake, and the work was called ‘fatally flawed’, ‘fraudulent’ and ‘dishonest’ by experts in the field.

Others claim the vaccine doesn’t work – but after the introduction of MMR in 1963, global measles deaths dropped, on average, from 2.6million to around 100,000, according to the WHO.

The figure has fluctuated since, believed to be partly due to the Wakefield scare in the mid-90s, but in 2017 there were reports of only 1,693 measles cases in England.

However, the long-term risks of exposure to the H1N1 vaccination in the womb have not been studied in detail.

They studied live birth records between October 2009 and September 2010 – when Swedish authorities recommended the entire population get vaccinated against H1N1 influenza.

Vaccinations with Pandemrix, developed by drug giant GlaxoSmithKline (GSK), were offered free of charge during that period.

The 69,019 babies studied were in the womb at some point during the vaccination campaign and were followed up until December 2016.

They then looked at diagnoses of autism spectrum disorder (ASD) – the medical name for autism – a condition a person is born with or shows very early in life.

After a mean follow-up of 6.7 years, the researchers found that autism cases were virtually the same between vaccine-exposed and unexposed children.

One per cent of vaccine-exposed children (394) were diagnosed compared with 1.1 per cent (330) in the unexposed group.

And there were no more autism diagnoses among children born to mothers who had their vaccination in the first trimester of pregnancy.

The findings, published today in Annals of Internal Medicine, are reassuring that vaccination strategies focusing on pregnant women are safe.

‘Furthermore, no association was found for vaccine exposure in the first trimester and ASD or the secondary outcome, AD [the most severe form of autism].’

The results are in stark contrast to those of a recent US study, which claimed a 20 per cent increased risk for autism in the children of women who had a flu jab during the first trimester.

Kaiser Permanente in Northern California looked at almost 200,000 children born at its centres from January 2000 to December 2010.

But they admitted the 20 per cent increased risk may just be due to chance, and not exposure to the flu vaccine.

Dr Ludvigsson suggested the findings from the team at Kaiser Permanente could have been ‘spurious’ because the link vanished when taking caveats into consideration.

Another study by Karolinska Institutet, published in 2015, found no association between childhood autism and H1N1 vaccine exposure during pregnancy.

But it had a shorter follow-up period of four years compared to the new study.

Writing in Annals of Internal Medicine, Dr Hviid said: ‘We know that autism has a strong genetic component and that no credible science supports the belief that vaccines administered in pregnancy (or in childhood) can cause autism.

‘A comprehensive and proactive approach to vaccine safety is needed now more than ever with the hopefully imminent arrival of Covid-19 vaccines.

‘We will have very limited information on pregnancy safety from the current ongoing trials, and if pregnant women will be offered the vaccines, we must have observational studies in place that can promptly evaluate the overall safety of vaccination in pregnancy.’

Children born to mothers with polycystic ovary syndrome (PCOS) are at greater risk of psychiatric and neurodevelopmental disorders such as autism, ADHD and behavioural problems, a study has found.

PCOS is a common hormonal disorder affecting an estimated 6-20 per cent of women of reproductive age in which there is an excess of male hormones. The ovaries do not function correctly, causing infertility, miscarriages and other health problems.

The study found the risk of being diagnosed with any psychiatric disorder increased 1.3-fold among children of mothers with PCOS.

The researchers, led by Catharina Lavebratt, an associate professor at the Karolinska Institutet, Stockholm, Sweden, found an increased risk existed for children born to mothers who had PCOS alone, but was further increased if PCOS was combined with mothers being obese, having gestational diabetes, a caesarean delivery, or if there were other medical problems for the mothers or babies around the time of birth.

To check whether the increased risk of neuropsychiatric disorders could be due to perinatal problems, gestational diabetes, caesarean delivery or fertility treatment rather than to PCOS, the researchers analysed the data to exclude mothers with these conditions, but they still observed a 1.2- to 1.3-fold increased risk.

Professor Lavebratt said today’s study, published in the journal Human Reproduction, is the first study to make the connection.

But as the study is observational it cannot show with certainty that PCOS causes the psychiatric and neurodevelopment problems so work is ongoing to investigate further.