Clinical trials for coronavirus vaccines could be stopped weeks early, if data from the tests is ‘overwhelmingly’ positive that the shots work, and are safe, Dr Anthony Fauci told Kaiser Health News (KHN).

In fact, the nation’s top infectious disease doctor said researchers would have a ‘moral obligation’ to stop the trials short to expedite approval of shots if there is little reason to believe they won’t work or will pose significant side effect risks.

There are currently about 120 vaccines under development around the world.

In the US, the Trump administration’s Operation Warp Speed has homed in on five lead candidates, of which three – those being made by AstraZeneca (with Oxford University), Moderna and Pfizer (with BioNTech) – are in their final-stage trials.

Results from these trials are expected around year-end, but ending the tests even weeks early could expedite approval and vaccination for front-line workers and vulnerable populations in the US. 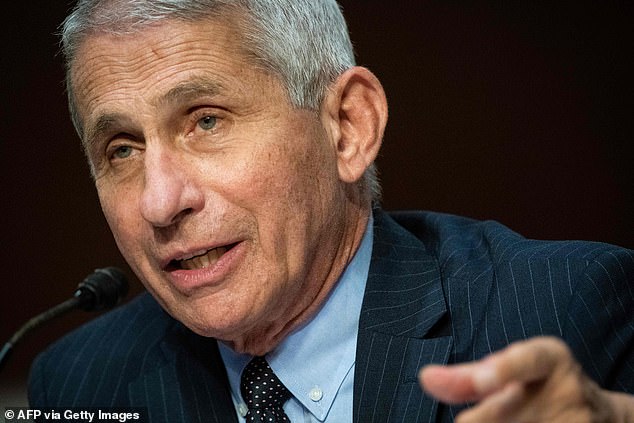 Top US infectious disease expert Dr Anthony Fauci told Kaiser Health News that, if the data is convincing enough that coronavirus vaccines are safe and effective, trials could be halted early to expedite vaccination for those who got placebos and FDA approval (file)

Companies and institutions are running the trials, but they are overseen by the Data and Safety Monitoring Board, which periodically reviews the evidence gathered in ongoing clinical tests.

If, at some point between now and the planned end-dates for respective vaccine trials, the Board looks at their data and decides that it ‘”is so good that you can say it’s safe and effective,'” the oversight group can advise that the trial conclude early, Dr Fauci told KHN.

Concluding a trial early would be done so that everyone who had been in the placebo group would get the real shot, and the vaccine could move ahead through the approval process, which undoubtedly be expedited.

It’s not an unprecedented move.

In fact, after review of data from the National Institutes of Health (NIH) trial of the antiviral remdesivir for treating severely ill coronavirus patients, the experiment was stopped short for the same reasons.

Dr Fauci himself announced the promising data from that trial from the Oval Office. The trial was abruptly shut down, COVID-19 patients from it who were given a placebo got remdesivir, and the FDA quickly issued emergency use authorization for the drug.

Some experts criticized the decision, arguing that the stunted data showed an underwhelming benefit to the drug.

Already, there is substantial concern among US experts and Americans that a vaccine will be approved before it ought to be.

Polling conducted by Stat News Harris Poll found that 78 percent of Americans are concerned that the progress of coronavirus vaccines toward approval driven more by politicas than by evidence that they work, and are safe. 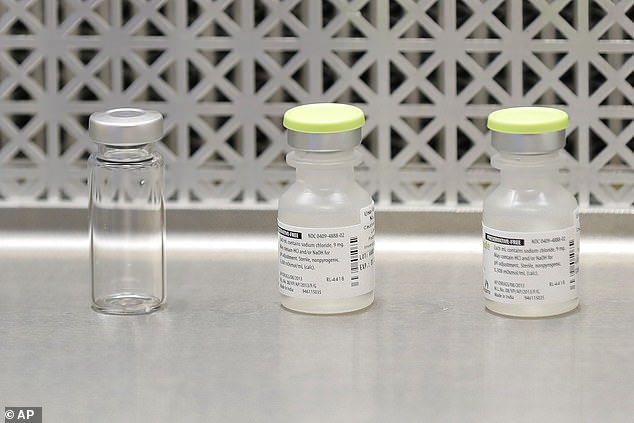 About 120 COVID-19 vaccines are under development around the world. Three are in their final stages of testing in the US (picturd: vials being prepared for a trial of one such shot, file)

The Trump administration has leaned heavily upon assurances that a vaccine will be ‘ready’ by year-end to bolster confidence that the pandemic’s grip on the US will soon come to and end and reopenings can continue.

‘I’m not concerned about political pressure,’ he told KHN bluntly.

‘If you are making a decision about the vaccine, you’d better be sure you have very good evidence that it is both safe and effective.’

Of course, once that evidence is gathered – even if it accumulates early – and a vaccine is approved, it won’t immediately go to everyone in the US any way.

An advisory group published a report on Tuesday laying out who experts believe should get COVID-19 vaccine first, when one becomes available.

First will be front-line workers in high-risk environments and facilities, as well as first responders such as paramedics.

Next, according to the National Academies of Sciences, Engineering, and Medicine report, people with underlying health conditions that make them particularly vulnerable to severe COVID-19 – such as those with cancer, COPD, severe heart disease, type 2 diabetes, obesity, compromised immune systems, kidney disease and sickle cell disease – should be vaccinated.

Elderly people have accounted for an outsized number of US coronavirus deaths, and those living in long-term care facilities and nursing homes should also be vaccinated in the earliest waves, the experts wrote.

The FDA has decided that a vaccine must be at least 50 percent effective to get its approval.

Some experts have speculated that a vaccine could be approved to give to those groups even as early as this fall, if the data backs that decision up, but they not that cutting sort the controlled study period could mean those approved vaccines come with poorly understood risks and side effects.