The coronavirus may cause men’s testicles to swell and impair their ability to have children, doctors have warned.

More than a dozen symptoms of Covid-19 have been reported since the pandemic began, including a dry cough, fever and loss of taste or smell.

But medics in the US have told men to be extra vigilant of the virus after a 37-year-old patient was taken to A&E with swelling and ‘discomfort’ in his scrotum.

The patient had already been suffering from the more common signs of Covid, including a cough and fever, for a week prior to going to hospital.

Doctors from the San Antonio Uniformed Services Health Education Consortium in Texas said the virus had damaged his spermatocytes, which keep sperm healthy.

They warned the damage caused by Covid-19 could have ‘a future impact on male fertility’.

Similar reports of testicular pain in Covid-19 patients have been reported previously but there has been no real research into the link. 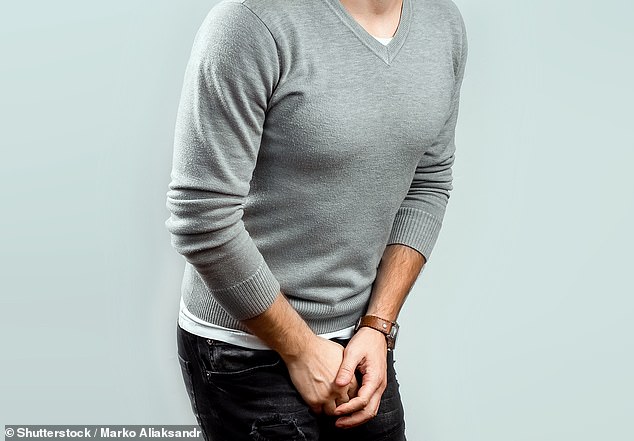 The coronavirus may cause men’s testicles to swell and impair their ability to have children, doctors have warned

Doctors who treated him believe the virus entered the body using ACE2 receptors on Leydig cells, which are present in the testes.

Writing in the American Journal of Emergency Medicine, they admit that such cases are rare.

Coronavirus may be spread by SEX: Study finds the killer virus in semen samples from men recovering from the illness

Coronavirus could be spread through sex, experts now fear after they detected the infection in the semen of recovering men.

Researchers in China analysed semen samples from 38 men who tested positive for COVID-19. Some had recovered while others were infectious.

One in six had traces of the coronavirus in their semen – including those who were no longer sick.

Top infectious disease experts admitted the findings were ‘not surprising’ because viruses such as Zika and Ebola are present in semen samples.

The Chinese study did not prove that the virus could be transmitted through sex – it only suggested it was a possibility.

But the finding prompted the team to warn that abstaining from sex while infected – and during recovery – would likely be a wise decision until the truth is uncovered.

But they hope raising awareness about them will help other medics ‘identify this disease at the earliest junction and trigger appropriate treatment, quarantine, and fertility follow-up.’

The patient spent a night in hospital before being discharged and prescribed antibiotics and painkillers.

His pain is said to have eased slightly but the case report did not say whether his  condition improved in the weeks after.

It comes after a study by two US doctors in April suggested men were more likely to find it harder to fight off Covid-19 because of the way the virus enters their testes.

When Covid-19 enters the body it binds with cells expressing the ACE2 protein, or angiotensin converting enzyme 2.

These are found in the lungs, heart and intestines. In men the protein is also found in large quantities in the testes whereas, in women, very small amounts are found in ovarian tissue.

In the UK alone men are dying from the disease at twice the rate of women, according to the Office for National Statistics (ONS).

The study, carried out by researchers in New York and Mumbai, followed 48 men and 20 women living in Mumbai who had been infected by coronavirus.

While the women in the study took four days to clear the infection men took 50 per cent longer, needing six days.

In three families that took part in the study men also took longer than women to recover from coronavirus.

Dr Aditi Shastri, an oncologist at Montefiore Medical Center in the Bronx, carried out the study with her mother Jayanthi Shastri, a microbiologist at the Kasturba Hospital for Infectious Diseases in Mumbai.

But British scientists have previously poured cold water on the theory.

Professor Ian Jones, a virologist at the University of Reading, said the coronavirus would need to travel in the bloodstream to reach the testes, which is ‘not generally’ what the virus does.

‘The main site of virus replication is the respiratory tract and to reach other sites the virus should have to travel in the bloodstream. This has been reported for the virus but it is not generally what coronaviruses do.

‘Men generally do worse than women in immunological outcomes, possibly the result of only one X chromosome, and I think that this imbalance is more likely behind the differences seen.’

Professor of Molecular Virology at the University of Nottingham Jonathan Ball said that a separate study had found no coronavirus in the semen of sufferers, suggesting it wasn’t an ‘important reservoir’ for coronavirus.

‘In a different study, which again was a preprint and so not peer-reviewed, a small number of males had their semen tested for the presence of the coronavirus while they were recovering from the virus,’ he said.

‘There was also a sample of testes from another patient that had unfortunately died. None of the samples tested positive for the presence of the virus, suggesting that the male genital tract wasn’t an important reservoir for the virus.’