For Celtic the final week of the transfer window threatens to be anxious and tetchy. More so, in the end, than a comfortable win over Hibernian.

Odsonne Edouard has his admirers in England. And while Scotland’s champions would prefer Aston Villa, Crystal Palace or Brighton to keep any bids to themselves, questions over the Frenchman’s commitment to the cause refuse to abate.

With ten-in-a-row on the line, selling their £9million talisman was unthinkable to supporters even before this clinical three-goal win racked up an eighth straight win. The sight of £5million striker Albian Ajeti pulling up after his fifth Celtic goal made it trickier still. 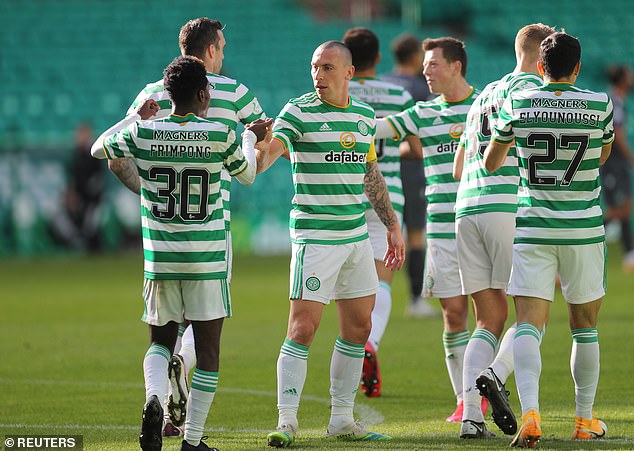 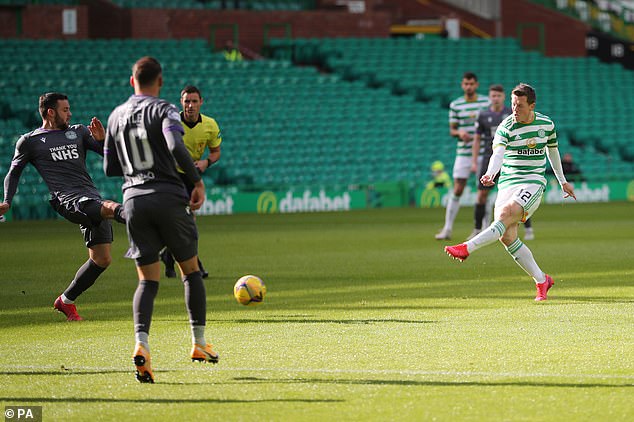 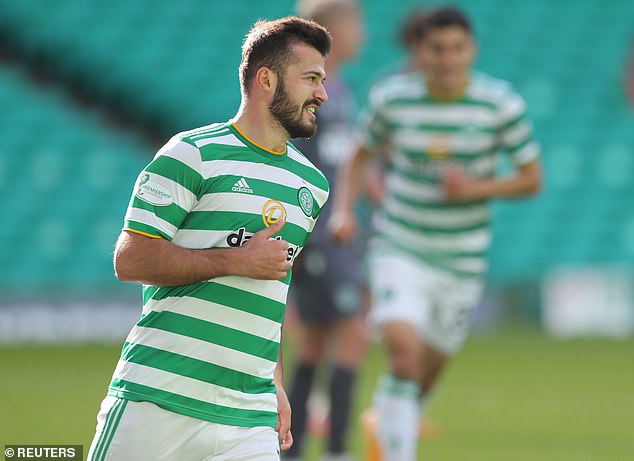 James Forrest will undergo a scan on an injury today and Ryan Christie will follow suit after limping from the fray at half-time. For Neil Lennon the loss of another key man might now be a bridge too far. Selling Edouard has suddenly become a whole lot harder.

Hibs were looking for their first win at Celtic Park in 10 years. And on paper this looked a decent chance to get it.

You couldn’t blame Jack Ross for going with the same starting eleven who drew 2-2 draw with Rangers last weekend.

Hibs don’t really *do* ten men behind the ball. And, despite edging their way through games, Celtic hadn’t quite looked themselves in attack or defence. The gamble of two up front – and a man less in midfield – worked for Jack Ross last weekend. Making it work at Celtic Park was always a big ask.

The absence of Edouard from Celtic’s starting line-up raised eyebrows and teed up inevitable speculation in the final week of the window.

A goal scoring hero in Latvia on Thursday, Mohammed Edyounoussi came in to form a new strike pairing with Ajeti.

Not quite himself in Riga, Edouard had to settle for a seat on the bench beside the lesser spotted Leigh Griffiths – back in the fold for the first time this season. The exile wouldn’t last long.

The concern with Ajeti from the start has been the Swiss striker’s fitness. Speaking to the BBC before the game Neil Lennon admitted the £5million striker had been nursed through games for fear of pushing him too far, too fast. Those fears were justified when Ajeti pulled up celebrating the fifth goal of his Celtic career after 36 minutes.

Edouard replaced him and if the Frenchman had any notion of Celtic entertaining interest from the likes of Aston Villa, Brighton or Crystal Palace this week Ajeti’s injury did him no favours on that score. It was hard for Peter Lawwell to countenance letting the unsettled fans’ favourite go anyway. Now? It might well be impossible.

Edouard arrived when Celtic were already 2-0 up. A Rangers rout of Motherwell ramped up the pressure before a ball was kicked. By and large, they responded. 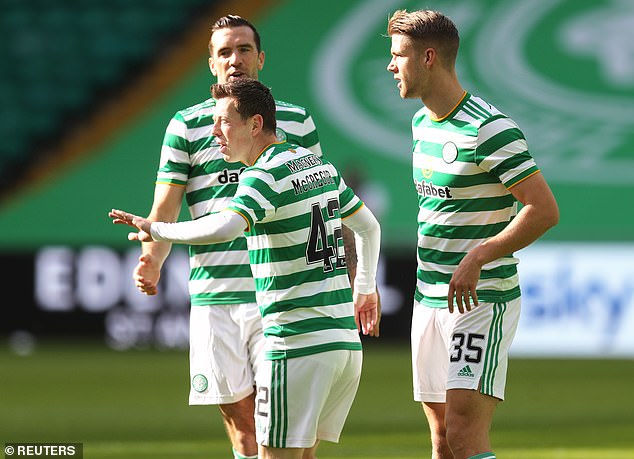 The first goal came after seven minutes. Callum McGregor’s second goal of the season was a rasping low effort from 25 yards aided and abetted by all the time in the world to pick his spot.

Some teams go to Celtic Park, lose an early goal and crumble. Watched from the directors’ box by owner Ron Gordon you never felt that was happening to Hibs

There were great contests in every area of the pitch. Greg Taylor and Martin Boyle went at it hammer and tongs. Kevin Nisbet barely gave Shane Duffy a minute of peace. When the big Irishman misjudged a ball down the flank Nisbet’s cut back for Christian Doidge. The strike skimmed the junction of post and crossbar with a rising shot and Celtic survived, Martin Boyle saw a thumping, dipping long range shot dip just inches over the bar. 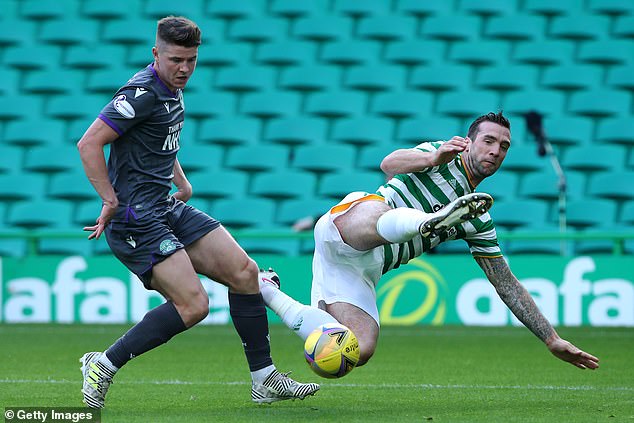 In Jeremie Frimpong – a key man in Riga – Celtic always had a counter attacking threat. The former Manchester City academy player tortured Hibs left-back Josh Doig with his pace and energy. Predictably, he was involved when Celtic crafted a second after 35 minutes.

Christie skipped into the area and laid the ball square to Mohammed Elyounoussi after Frimpong left it. The Norwegian was in a tight spot and showed lovely footwork to prod the ball towards goal. Ofir Marciano dived full length to produce a fine save, but he couldn’t stop Ajeti slotting his fifth Celtic goal into the net.

For Celtic it was a costly strike in more ways than once. Ajeti’s game was cut short by what looked like a hamstring problem. Ryan Christie also tumbled to the ground at the same time and made way for £3.5million signing David Turnbull at half-time 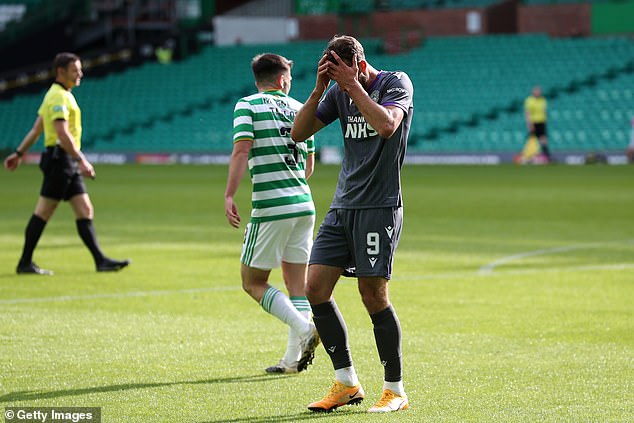 Scotland boss Steve Clarke has already lost one Celtic player for the Euro 2020 play-off semi final in James Forrest. The further loss of Christie might be the last thing he needs.

Less surprising was replacement of Hibs full-back Josh Doig with the experienced Lewis Stevenson. To have any chance of a fightback the visitors had to find a way to shackle Frimpong and turn defence into attack. They also had to find a way to even things up in midfield where they were outnumbered.

The Edinburgh side had keeper Ofir Marciano to thank for keeping them in the contest. Nominally at least. 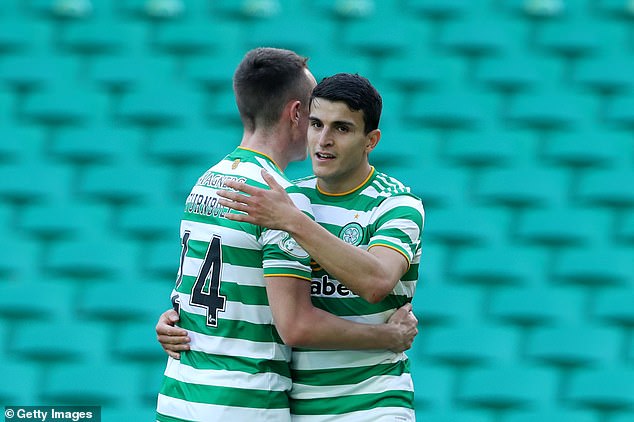 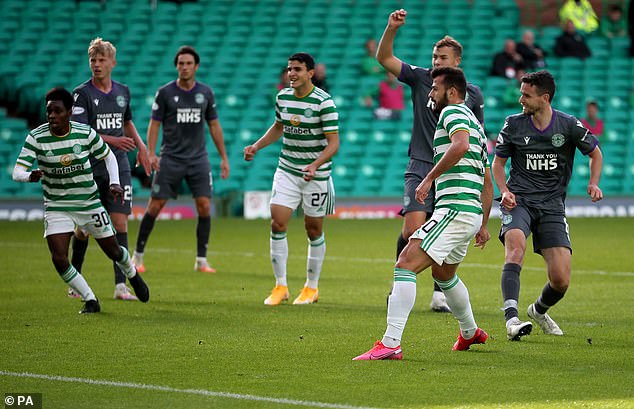 Marciano’s first heroic intervention came when he pushed a rasping low shot from Israeli international teammate Nir Bitton shot round the post. As Celtic laid siege to the Hibs half he then foiled the captain Scott Brown, David Turnbull and Callum McGregor with fine stops.

A persistent threat in the first half the visitors made do with scraps in the second. The introduction of on-loan Rangers winger Jamie Murphy failed to change the direction of play. Midfielder Joe Newell – excellent in the first half – blazed a couple of efforts over the bar. The best Hibs effort came from a thundering half-volley from Kevin Nisbet blocked bravely by Shane Duffy when Barkas failed – not for the first time – to command his area.

A Hibs goal would have teed up an interesting climax to the game. Yet Celtic removed the element of doubt with nine minutes to play, a delightfully weighted through ball from Turnbull allowing Elyounoussi to slide the third goal low into the net from 12 yards.