By Darren Boyle for MailOnline

A 31-year-old British care worker is one of only five people in the world to have tested positive twice for Covid-19.

The woman, who has not been identified, has been tested for Covid-19 five times over the past five months.

On two occasions, she tested positive for the disease. 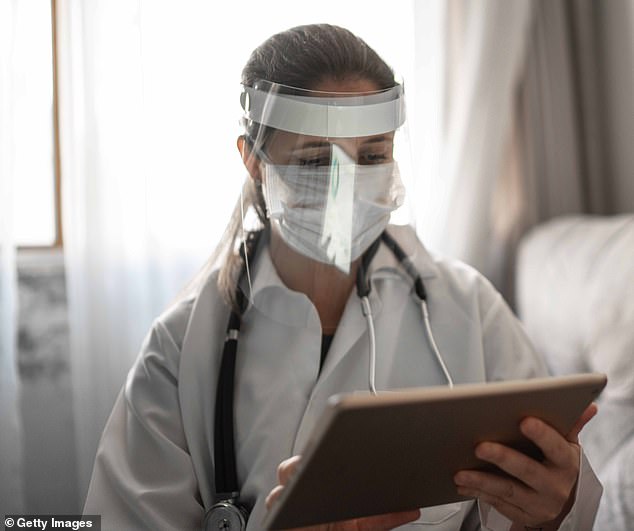 A 31-year-old British woman is the fifth person to test positive for Covid-19 for a second time, file photograph 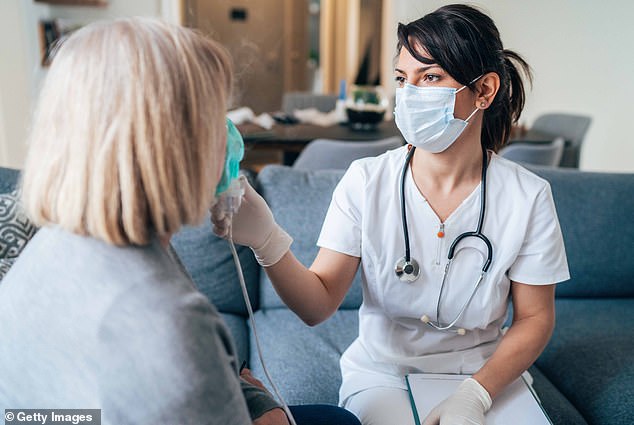 The unnamed mother of two said she was surprised by the second diagnosis as she was not experiencing the symptoms she had during her first time with the disease. FIle photo 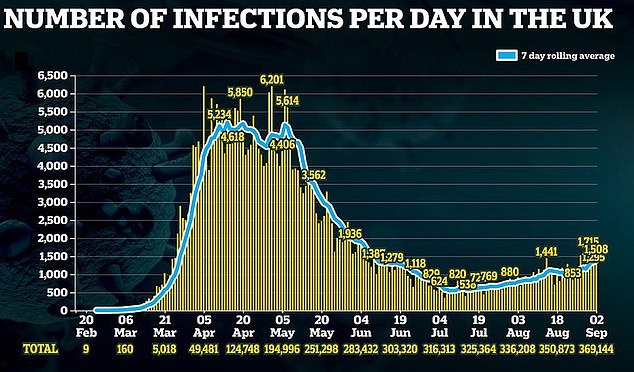 The mother-of-two from Reading, Berkshire, told The Sun: ‘I always thought that if you develop coronavirus once then you are immune after that, but maybe I’m a special case.

‘When I caught it the first time, it was almost expected given the nature of my job. But I never expected to get it twice.’

She said she first became symptomatic in March, with a shortness of breath, high temperature and raised blood pressure. She had her first Covid-19 test in early April and was confirmed to have the disease.

She was tested again a fortnight later and was negative.

She became symptomatic in June and was sent to hospital where she was tested, providing a negative result.

As she works in a care home, the mother was asked to remain at home until her condition improved – despite the second negative test.

WHAT IS THE TRUTH ABOUT IMMUNITY TO COVID-19?

Scientists still do not know for sure whether people can catch Covid-19 more than once or if they become immune after their first infection.

With some illnesses such as chickenpox, the body can remember exactly how to destroy it and becomes able to fend it off before symptoms start if it gets back into the body.

But it is so far unclear if people who have had coronavirus can get it again.

Tests have shown that many people who recover have antibodies – which can produce future immunity – but it is not known whether there are enough of them.

However, antibodies are only one type of substance that can produce immunity. The immune system is a huge web of proteins that have different functions to protect the body against infection.

Others, including white blood cells called T cells and B cells, can also help the body to fight off disease but are more difficult to discover using currently available tests.

Evidence is beginning to suggest that antibodies disappear in as little as eight weeks after infection with the coronavirus, scientifically called SARS-Cov-2.

On the other hand, T cells – which target and destroy cells already infected with the virus – are ‘durable’, Professor Altmann said.

A promising study done on monkeys found that they were unable to catch Covid-19 a second time after recovering from it, which led scientists to believe the same may apply to humans.

The rhesus monkeys were deliberately reinfected by scientists in China to test how their bodies reacted.

Because the coronavirus has only been known to scientists for seven months there has not been enough time to study whether people develop long-term immunity.

But, so far, cases of people getting infected more than once have not been numerous nor convincing.

A fortnight ago she tested Covid positive for the second time.

She told The Sun: ‘I really wasn’t well when I contracted this disease in April. It left me in bed for over a week. Once I had successfully self-isolated and recovered, I went and got tested again.

‘As I expected, I was negative and I thought that would be the end of it. I hadn’t heard of anyone getting it twice. I planned to go back to work and before I did, I took another test. I had no symptoms. I got the occasional headache of an evening but that is the only thing I could think of that was any different.’

She said did not have shortness of breath or have a fever.

On Monday, she took a fifth test at home and is now expecting to be negative again.

She said she has been self-isolating but couldn’t believe that she had contracted the disease a second time.

She hopes the latest test will come back negative again as she has not been able to care for her children properly since April.

For the past six months she has spent most of her time corresponding with her family over Zoom.

A 33-year-old man in Hong Kong became the first person to become infected by Covid-19 after he developed two different strains.

Genetic analysis revealed his second infection, which he caught on a trip to Europe, was caused by a different strain of the virus.

All viruses — including SARS-CoV-2, the virus behind the pandemic — mutate over time. Analysing the DNA of pathogens can spot any changes, which can make them weaker or deadlier.

Doctors warned their findings prove ‘re-infection can occur just a few months after recovery’. They said it was likely immunity is short-lived and that antibodies against Covid-19 fade quickly.

But the unidentified man did not have symptoms of Covid-19 the second time — he was only discovered through screening at an airport. This may suggest he had some level of immunity that protected him from severe disease, experts say.

Covid-19 survivors can be reinfected twice, according to doctors in Hong Kong who report the first known case

Hopes of long-lasting immunity have been hampered in recent months by several reports that have claimed to show people being struck down with the coronavirus twice.

But until now, scientists have reiterated that cases of re-infection were more likely down to a fault with testing, or that inactive particles of the virus are still present in the body of patients months after they beat the illness. 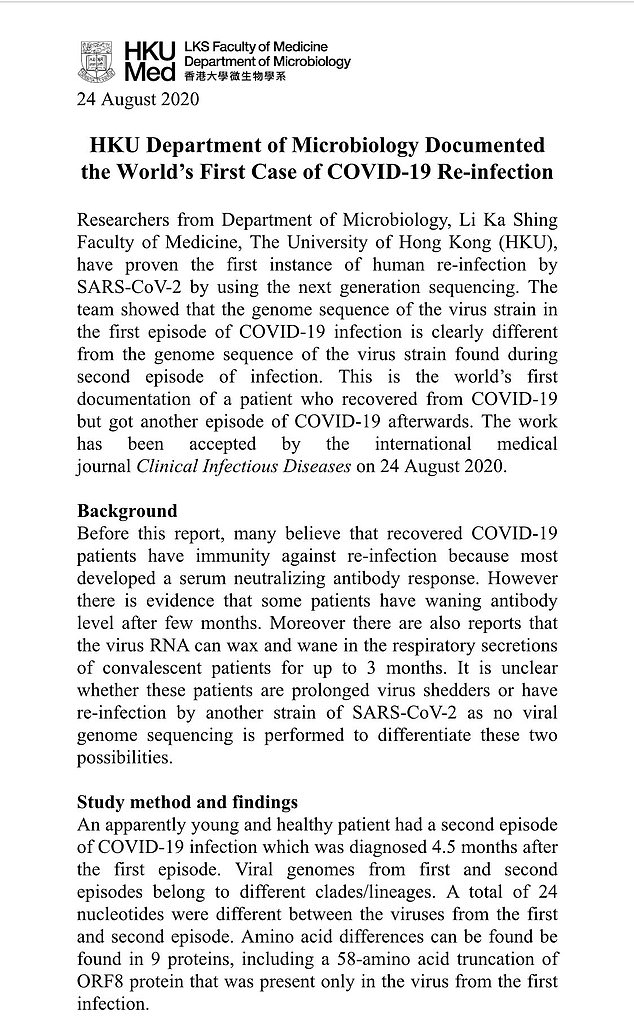