Boris Johnson‘s Britain and the Donald Trump administration in the US have handled the Covid-19 pandemic the worst, according to a study.

Just 46 per cent of Britons and 47 per cent of Americans think their government has coped well with the coronavirus. In comparison, 95 per cent of people in Denmark believe their country’s politicians have performed well under the pressure of the crisis.

Sweden, which opted against a lockdown, also scored well, with 71 per cent of residents praising their government’s controversial approach.

Those who voted for the government in were more likely to give a positive rating of their leader’s handling, compared to those who didn’t.

And countries where economies had crashed were more likely to hold a negative opinion, including the UK which has officially entered a recession because of the economy-crippling lockdown measures. 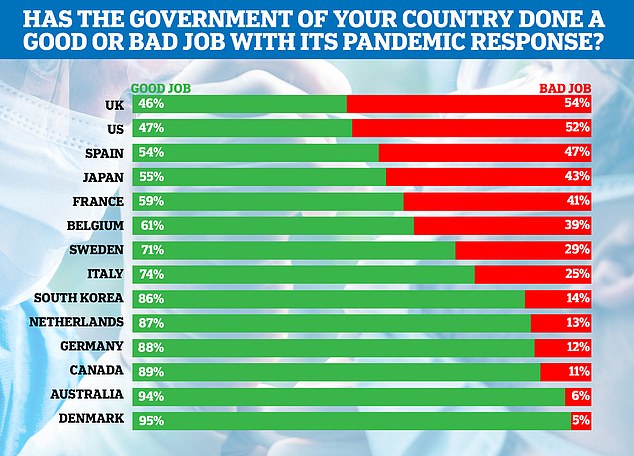 In every country polled other than the UK and US, most people said their government had done well with just 27 per cent saying their country has handled it poorly. Denmark is at the top of the league, with 95 per cent. The majority of people in the UK (54 per cent) were not pleased with the government’s handling of the crisis — even worse than the US (52 per cent)

Experts conducted telephone interviews between June 10 and August 3 with people in the US, Canada, Belgium, Denmark, France, Germany, Italy, the Netherlands, Spain, Sweden, the UK, Australia, Japan and South Korea.

Residents were asked whether they thought their government had done a good job in response to Covid-19, which has so far infected more than 20million people in almost every corner of the globe.

IT’S NOT THE FIRST TIME BRITAIN HAS SCORED BADLY

Research by The Economist Intelligence Unit also found Britain ranked near the bottom in a damning global league table that compares how countries have tackled the Covid-19 pandemic.

Only Belgium fared worse, according to a review of testing, healthcare and death rates that gave 21 OECD member nations a score out of four.

The UK (2.22) was on par with Italy and Spain. Sweden, which controversially bucked the trend and opted against imposing a lockdown, scored higher (2.56).

Analysts behind the report claimed the low scores recorded for both Spain and Italy were ‘understandable’, given they were the first in Europe to be hit.

But analysts claimed it was ‘harder to explain’ the UK’s poor score, saying the ‘global connectivity’ of London may have played a role in the death toll.

The team wrote: ‘The country had a slower build-up of cases than other European countries and more time to prepare.

‘In addition, Britain’s centralised public healthcare system provided the government with crucial data as to who was most at risk.’

The team suggested an ‘insufficiently fast and co-ordinated response’ as well as the  ‘initial lack of testing capacity’ for the UK’s poor response.

And they claimed Number 10’s controversial decision to suspend track and trace in early March ‘may help to explain why the UK became an outlier’.

New Zealand fared the best (3.67). The US — whose performance was ‘not as poor’ as the death figures suggest — came mid-table (3.11), the report revealed.

In every country polled other than the UK and US, more than half of people said their government has done well. Just 27 per cent said their country has handled it poorly.

But in the UK, the majority (54 per cent) were not pleased with Number 10’s handling of the crisis — even worse than the US (52 per cent).

The survey found almost six in ten US adults said cases could have been considerably lower had President Donald Trump taken a more cooperative approach, following his decision to cut ties with the World Health Organisation.

This rose to seven in ten in the UK, with Europeans broadly thinking there had been missed opportunities to coordinate the initial response while cases dramatically rose in Italy, Spain and the UK.

Data showed attitudes toward how countries dealt with the coronavirus epidemic are heavily influenced by their political leniency.

The UK and US had high levels of political polarization on views of the government’s handling of this crisis.

A majority of right-leaning Britons (55 per cent) gave a positive rating to the way Mr Johnson’s Conservative government has dealt with the crisis.

But just 26 per cent on the left were of the same opinion, the study led by research associate Kat Devlin found.

Similarly, 76 per cent of Republicans and independents who lean to the Republican Party say the Trump administration has done a good job. Just a quarter of Democrats and Democratic leaners agree.

Professor John Curtice, a British political scientist the University of Strathclyde in Glasgow, said that the phenomenon is well understood by social scientists.

He told CNN: ‘Generally speaking, it doesn’t matter what you’re asking: the government in power is more likely to be seen well by people who voted for it than people who didn’t.’

People in countries who think their nation is economically stable were also more likely to say their country had done a good job of dealing with the coronavirus outbreak. 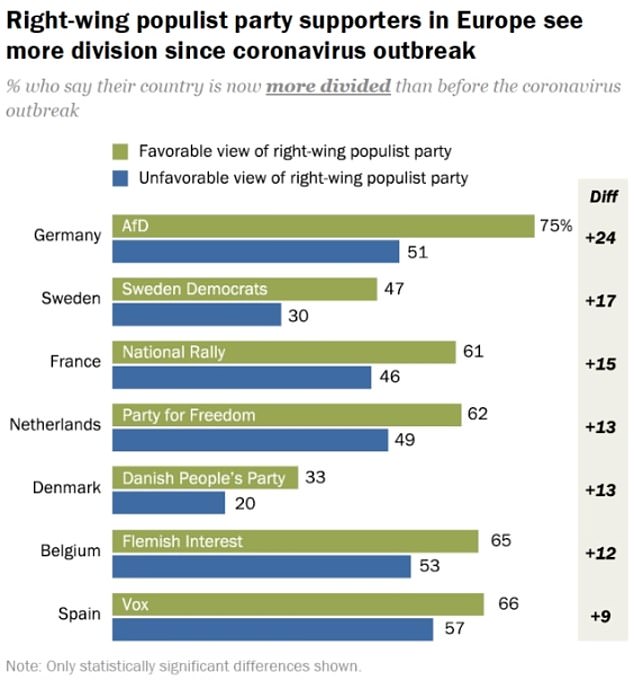 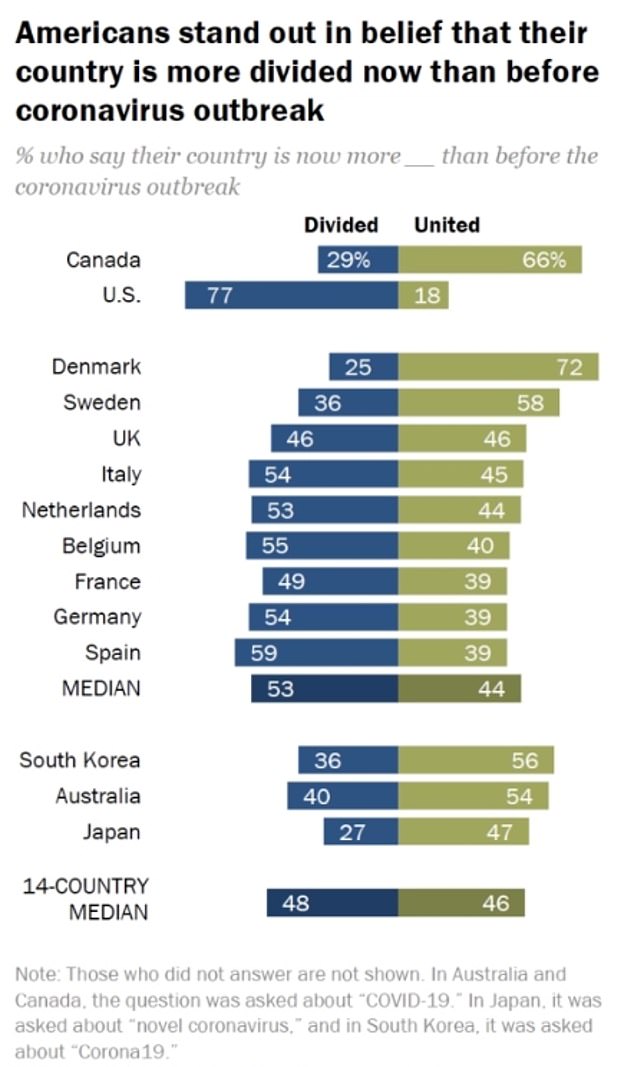 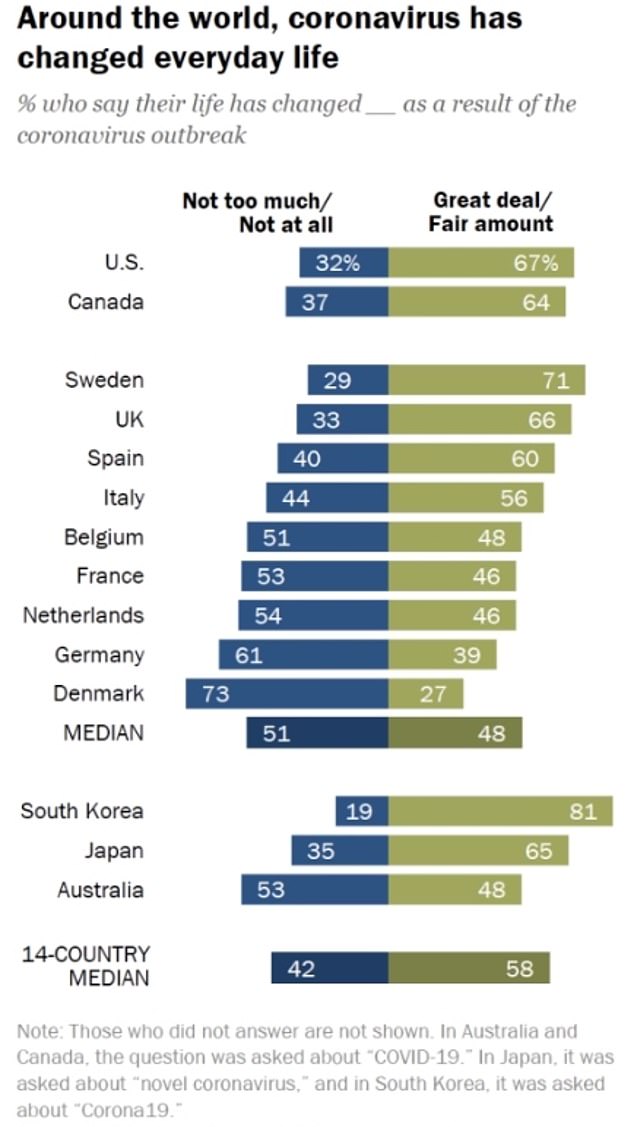 GOVERNMENT CAMPAIGN TO GET BRITONS BACK TO WORK

Boris Johnson will launch a major drive to persuade more Britons to return to their workplaces as remote workers were warned they could be more at risk of being sacked.

The Government is increasingly concerned that continued working from home will deal a hammer blow to struggling town and city centres.

The Prime Minister is expected to step up his efforts next week to get more people back to their normal routines by reassuring the public that ‘the workplace is a safe place’.

The prospect of a new campaign to encourage commuters to return to their offices will be welcomed by Tory MPs who today warned that businesses in urban centres are facing ‘devastating consequences’ if things do not go back to normal.

But Labour has accused ministers of ‘threatening’ workers and of ‘forcing’ them to make an ‘unconscionable’ choice between their health and their job after a Government source said people who continue working from home could be the first to go if firms restructure.

Meanwhile, Transport Secretary Grant Shapps today said he believed there is a limit ‘in human terms’ to remote working as he argued people will want to return to workplaces to see their colleagues.

He also insisted that public transport services will be increased if trains and buses get too busy when more workers resume their commutes.

Chancellor Rishi Sunak is said to be worried of further job losses among businesses that depend on office workers, such as sandwich shops, pubs and gyms – along with the cost of running nearly empty buses and trains.

A Government source told The Telegraph: ‘People need to understand that working from home is not the benign option it seems.

‘We need workers to be alert to what decisions their bosses may take in the weeks ahead. If they are only seeing workers once a fortnight then that could prove problematic for some employees in the future.

‘We want employees to be careful what working arrangements they accept. Suddenly the word ‘restructure’ is bandied about and people who have been working from home find themselves in the most vulnerable position.’

Labour’s shadow minister for business Lucy Powell said: ‘It beggars belief that the Government are threatening people like this during a pandemic.

‘Forcing people to choose between their health and their job is unconscionable.

‘Number 10 should condemn this briefing and categorically rule out any such campaign.’

Some 69 per cent of people in the UK with a positive view of the economy think the British government had done a good job. But only 40 per cent of those with concerns for the economy say the same.

The UK economy suffered its biggest slump on record during lockdown, pushing the country into official recession earlier this month.

The economy shrank 20.4 per cent, compared with the first three months of the year as a result of the mass closure of shops, restaurants and car dealerships.

It’s a worse outcome than Germany, France and Italy, and double the 10.6 per cent fall recorded in the US, the Office for National Statistics said.

Among Americans with a more optimistic view of the economy, 78 per cent reported that they approve of the way the US government has dealt with the virus.

But those who think the American economy is currently in poor shape are less than half as likely to give the government response a positive rating.

It compares to Denmark and Australia where more than 90 per cent of people in either category took a positive stance on the government’s response.

The respondents were also asked if they felt their country had been united as a result of the pandemic.

Fewer than two in 10 people (18 per cent) in the US said the country is more united now after suffering the worst Covid-19 outbreak — almost 6million cases and 183,000 deaths.

It comes amid tensions in the lead up to the presidential election on November 3 and ongoing Black Lives Matter protests in the wake of police brutality.

The US, where a patchwork of coronavirus restrictions are in place across each state, scored a full 21 percentage points below the next lowest-ranking countries.

Germany and France had the second and third lowest score for feelings of unity, where 39 per cent of respondents said their country was more united than before Covid-19.

Denmark, once again, ranked top. Seven in 10 people said their country had become more united as a result of the pandemic.

There was little consensus in the UK, which was split down the middle — 46 per cent of respondents on each side. The remaining eight per cent did not answer.

The majority of participants, a median of 59 per cent, said coronavirus cases could have been lower had leaders globally worked together.

In countries with relatively good Covid-19 outcomes, respondents did not think the number of coronavirus cases would have been reduced by international cooperation.

Some 78 per cent of people in Denmark, which has reported 17,000 cases, think cases would not have been reduced by international cooperation, and more than half (56 per cent) in Germany, where 240,561 cases but less than 10,000 deaths have been reported.

Among other findings in the survey were that women in every country are more likely than men to say their lives have changed because of the crisis.

In Sweden, more than seven out of 10 people (71 per cent) said their lives had changed a great deal as a result of the outbreak. 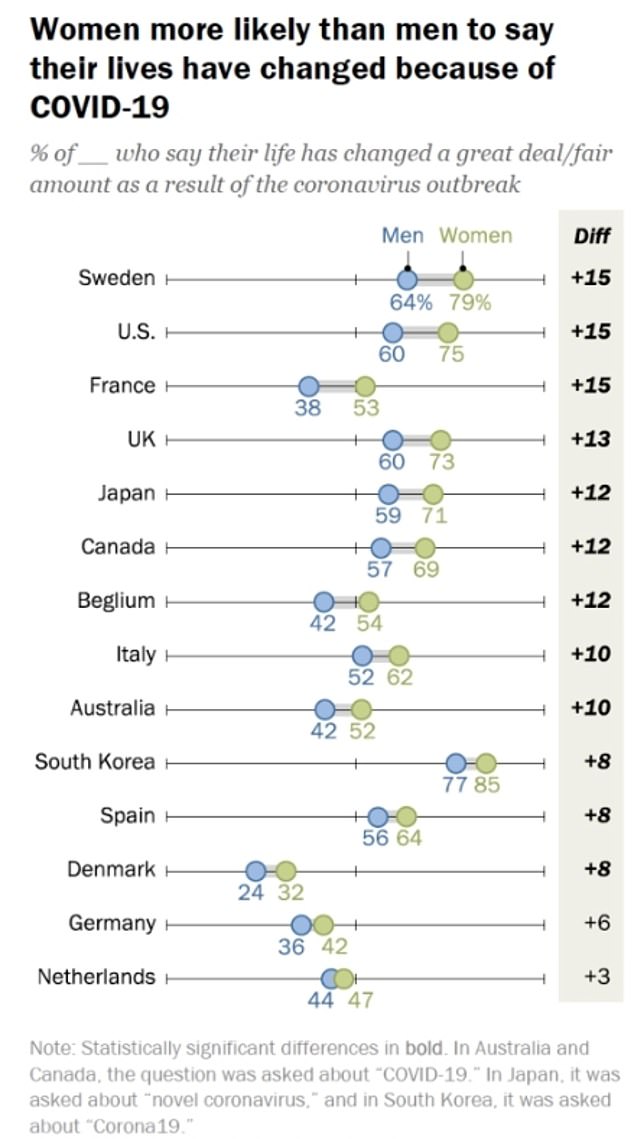